You Don't Mess With The Marcus 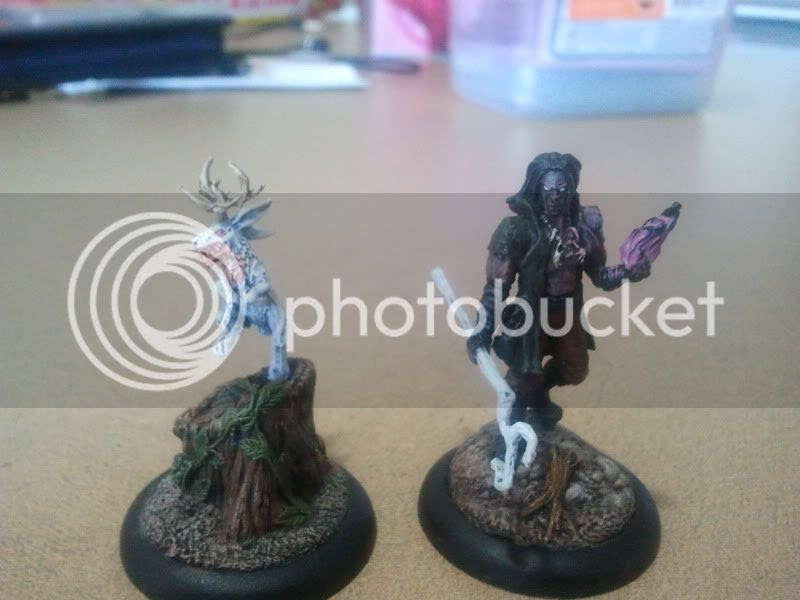 So before I get into this week’s blog, The past two weeks have seen me playing A LOT of Malifaux games. At the time of posting I actually played this Marcs game about two weeks ago, and have since played (and thus need to write posts for) Tara and then 4 other Masters at the Cancon convention over in Canberra! So I have a lot of blog posts to get through over the next week, so get ready for an avalanche! Anyway, back to the Master of the day…

Ah, Marcus. He was my second love after Zoraida and between the two of them, they’re responsible for me buying at least a third of the crews in the game (seriously, they have some huge hiring pools)! My opponent for this match, Paul, wanted to get some practice in with his Kirai crew before flying to Canberra this weekend for a tournament we’re both attending at Cancon (ie our local Australian gaming convention). I wasn’t particularly fussed with who I played in my game so I let Paul choose my Master, which in this case was Marcus! So it was time to blow the dust of my Beasts, pull out his cards and figure out how the hell he now works in M2E!

Marcus has a bit of a fan base on the forums so there’s actually a pretty long and detailed thread of people discussing him. That said, for the purpose of my game I mostly just read through the writings of Dave (aka iamsssk), who has written about Marcus and his friends in great detail on his blog (below). I’d thoroughly recommend to anyone who wants to try out Marcus to take a read of his blog, and his writings certainly clarified a few tricks I could use in my own game.

Paul and I decided to play one of the missions from the Cancon Malifaux Tournament next week, so… 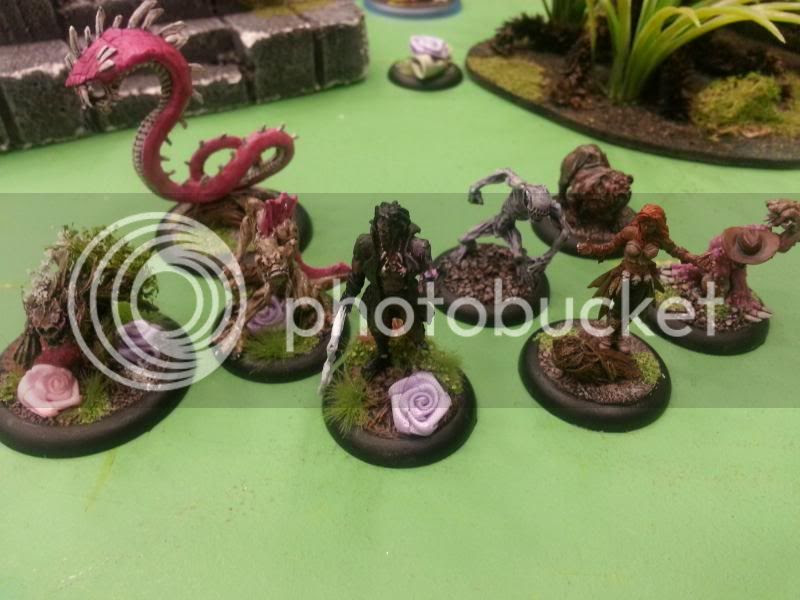 Marcus and his friends for the day

One of the things I picked up from Dave’s blog was that Feral Instincts (for Feral) and The Hunger Cry (for Domesticate) was a really potent combination, effectively letting you give negative flips to a single model for two (0) actions, so those two upgrades were in. Choosing between Trail of the Gods and The God’s Domain was tough, but in the end I thought I’d try a more supportive approach with Marcus and so figured Domain was the better option for that.

According to Dave, Myranda should come with Imbued Energies as standard and after looking at the upgrade myself, I can see why. For the rest of the crew I went for a variety of different beasts. The Silurid, Canine and Moleman were my objective grabbers, the Waldgeist was there to hold some Squatter’s Rights markers with his 4” engagement range and the Shikome and Razorspine were my combat pieces. Unfortunately I couldn’t fit in the lauded December Acolyte on account of not having his model, and while the Jackalope has been a mainstay of my Marcus crew in the past, she just seemed like a bad idea when one of the schemes was Make Them Suffer.

We were using the 1-8-2014 rules for Kirai (and my Shikome, of course!), but given that Ikiryo’s infinite summoning trick was likely to change (which it did), we decided to house rule that Ikiryo could only be summoned through Malevolence once per turn.

Paul went for the same schemes I did – Protect Territory and Take Prisoner on Myranda. Like me, Paul wasn’t familiar enough with the opposing crew to realise that his Take Prisoner target was a bad idea. Oh well. :P 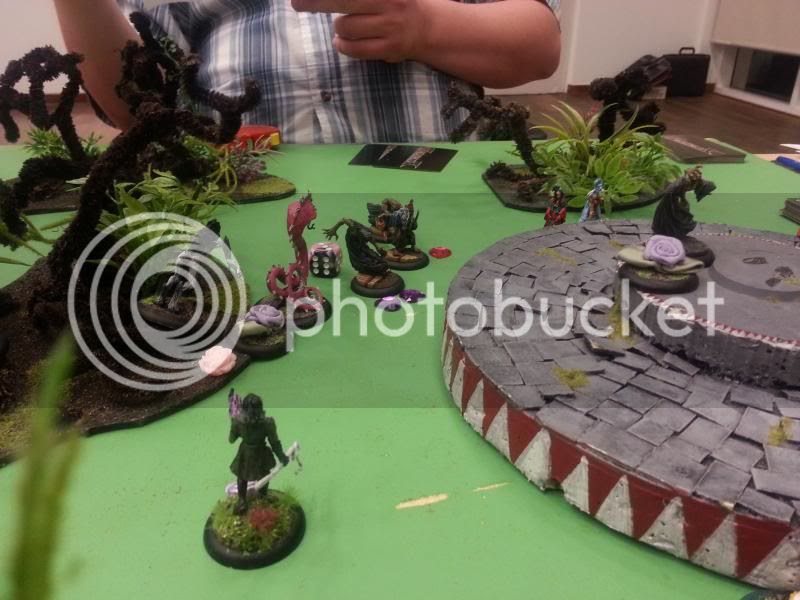 Turn 2 started with Marcus casting Feral and then Domesticate on Datsuba (effectively neutralising her), before using Alpha on his Shikome to let him change the Onryo threatening the markers on the right flank. This didn’t go down so well, with the Onryo resisting Adversary, surviving the Shikome’s attacks and summoning Ikiryo in the process. Ikiryo made short work of the Shikome, preventing me from activating him a second time as planned. So much for that Alpha! The rest of the crew claimed or guarded squatters rights markers, while Myranda shape shifted into a Blessed of December and proceeded to threaten Kirai. Marcus spent most of the game neutralising one model each turn with Feral and Domesticate, and using his (1) charge trick to finish off Gaki and threaten Kirai (which didn’t work so well – her defensive trigger is solid!).
Between the Silurid and the canine/moleman I was able to score full points for both Squatters Rights and Protect Territory, while Paul also achieved the same objectives but with less VPs for each thanks to my efforts in getting in his way. 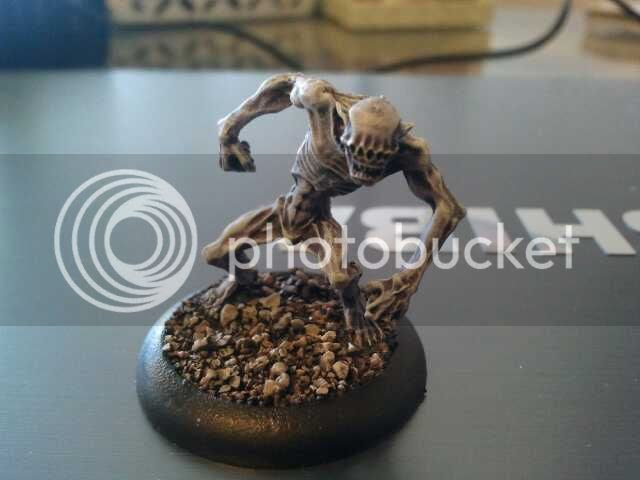 My Shikome proxy. Much nicer than the standard mini IMO!

Both Paul and I were really impressed with just how much Marcus could do, both with his variety of different actions and the sheer volume of things he could do in a single activation. Turn 3 really showcased this, where in a single activation he was able to Charge Twice (killing a Gaki and hitting Kirai), use Howl for the Wp buff/debuff and then Feral/Domesticate Kirai to neutralise her for a turn. If he hadn’t been charging, he could have played a more supportive role instead with Alpha, the Law of Meat and Darzee’s chant. So with Marcus, you get a model who can debuff enemy models, buff his own models and/or wade into combat himself to kick arse and take names. Not only that, but he’s no slouch in any of those roles either. Marcus really is the toolbox Master, able to take on any role you need him too!

One thing I will say though, is that I feel like I misused Marcus a little this game. The (1) action charge from Domain of the Gods is excellent, but to get the most use out of it you need to ensure he stays unengaged so he can keep charging things. I guess it’s either that, or give him Trail of the Gods instead so he can just mix it up in melee better with the extra attack!

One of the things I wanted to see this game was how the Silurid compared with the Moleman/Canine tag team, since both were taken to fulfil similar roles. As it turns out, neither objective grabber disappointed me. The SIlurid was obviously much faster but the Canine and Moleman had the benefit of both better resilience and more AP. There are certainly schemes that the SIlurid does better over the Canine/Moleman and vice versa, and this seems to be defined by how fast your objective grabber is going to need to be.

Myranda was interesting. I originally intended to keep her around for at least a few more turns but after losing the Shikome I really felt as though I needed another heavy hitter. So rather than let the Razorspine benefit from her defensive aura for a little longer Myranda decided to pick up the slack and turn into a Blessed of December. I guess that flexibility is Myranda’s biggest strength - her shape shifting allows her to be exactly what you need when you need it. In this game I needed more killing power but if the game called for more scheme markers, Myranda could have shape shifted into a Silurid and done that instead.

Myranda’s chosen Beast form, the Blessed of December performed well enough. The alternative form was the Sabretooth Cerebrus, but I picked the Blessed instead for two reasons – one is that she seems somewhat tougher than the Cerebrus, while the other was that I still have flashbacks to how bad the Cerebrus was in 1.5! The Blessed’s great melee value and healing really served her well but I found that her biggest asset was her Leap. It got me away from more problematic models like the Drowned when I needed to and unlike the Cerebrus, it didn’t require a Mask so it was not too hard to cast. On the whole then, I quite enjoyed throwing the Blessed around. As for the Cerebrus, I’ll just have to give her a fair go some other time!

I honestly keep forgetting just how tough a Waldgeist is. Armour 2, Perfect Camouflage and a potential 4” melee range made it perfect for guarding the squatters rights markers and it was able to hold up Pauls advance quite nicely too. As far as tanks for a Marcus crew goes, I’m not sure you can do much better than a Waldgeist.

If there’s one model in my Marcus crew that didn’t get a chance to prove itself, it would be the Shikome. I had big plans for my poor Shikome, but his failure to cast Adversary on the Onryo plus his early demise at the hands of Ikiryo meant that his impact on the game was minimal at best. Fortunately that was also the only appearance of Ikiryo this game, thanks to Kirai’s placement and Paul not having the right cards at the right time.

While the Shikome barely got a chance to shine, the real disappointment for me was the Razorspine. It did do okay, holding up a Drowned and refusing to die thanks to Defensive Stance, but honestly I’m not in love with it. While there’s nothing particularly wrong with him, he seems to sit in a middle ground between the killing power of a Sabretooth or Blessed, and the resilience of a Waldgeist. It does have some nice in-combat mobility but when it comes down to it, I think I’d prefer something with a more defined role. 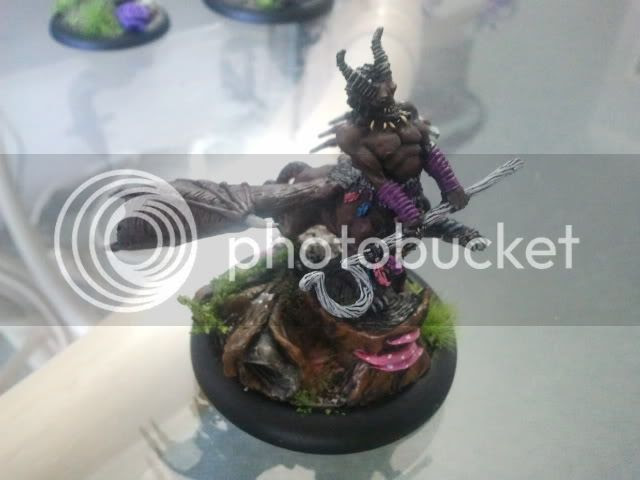 One day, Avatar Marcus, one day...

Marcus definitely saw a change for the better when he was revised from 1.5 to M2E. He retains his fantastic tool box of abilities, except now they’re better and he’s actually able to be great at everything, rather than decent at a one thing at a time but crap at everything else! Not only that, but he supports his beasts much more effectively so unlike in the last edition, you actually want to use a crew of beasts with him. Overall then, I’m very happy with Marcus. I feel like his flexibility in what he can do keeps him interesting, and it also makes him pretty strong in-game as well.

In fact, after getting a feel for how he works I’m actually a little afraid to face him across the table. While he doesn’t have the raw killing power of some Masters, the sheer flexibility and disruption potential that Marcus offers makes him an amazing threat. So on one hand, I’m glad to see that the infamous underdog has come into his own with the new edition. But on the other hand, god damn, he’s going to be a scary mother f*&$er to face…