Rivers of Blood – The Viktorias 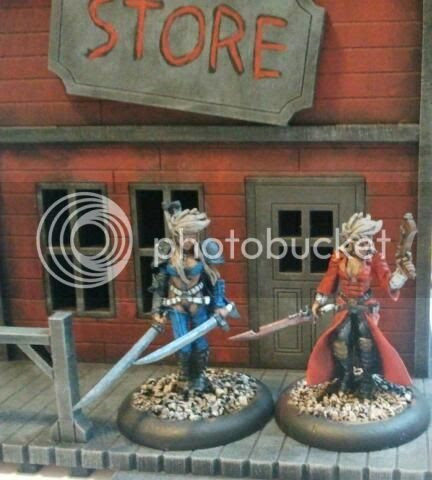 It seems I’ve been getting a lot of games in recently so the next entry to the Rainbow Challenge is coming out in record time! This time I’m talking about my experience with the Viktorias against John and his Outcast Tara crew. 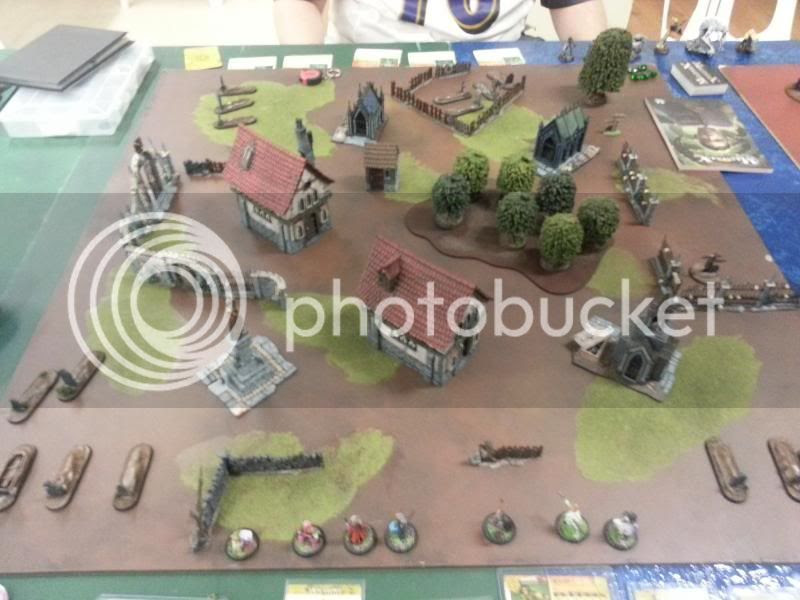 The table - most of the killing went on around that house on the left.

I swear, I committed to using the Viks before flipping for Strategies & Schemes! 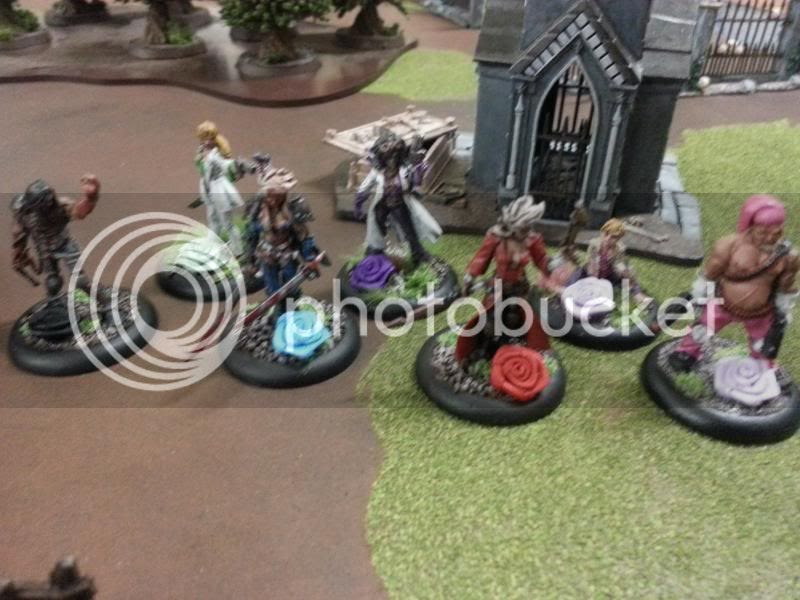 I really thought I'd taken a better pic than this...

So the first thing you might notice – I went for the Malifaux Child over a Student of Conflict! The Student is certainly rated very highly and I initially did intend to include it. But as I made my list, I realised I could instead use Oathkeeper on Blood Vik to give her the fast condition on a critical turn. It took up an upgrade slot, but it did mean I wasn’t tied to keeping Blood Vik near the Student. Also a Malifaux child, could save Ash Vik and AP by casting Sisters in Fury, plus he’s got a healing spell if I can spare a 7+ Rams. Sisters in Spirit (for the teleport) and Synchronised Slaying (for Accomplice) were essentially there to let me slingshot Blood Vik to where he needed, and Mark of Shez’uulis just plain great.

The rest of the crew was pretty standard – I wanted a Convict Gunslinger for some area denial duties on a flank and Bishop is just a Swiss army knife of awesome. Everyone who could got Oathkeeper, since Fast is pretty difficult to pass up!

John, my opponent, wanted to get some more practice in with Tara so that’s who he went with. For the most part it was a pretty standard Tara list, although after our game he did say that he’ll probably swap something out to get some extra punch in the crew. I also suggested adding Oathkeeper to the Nothing beast, which I’ve seen work to good effect in the past.

For schemes, John decided on Outflank and Breakthrough. 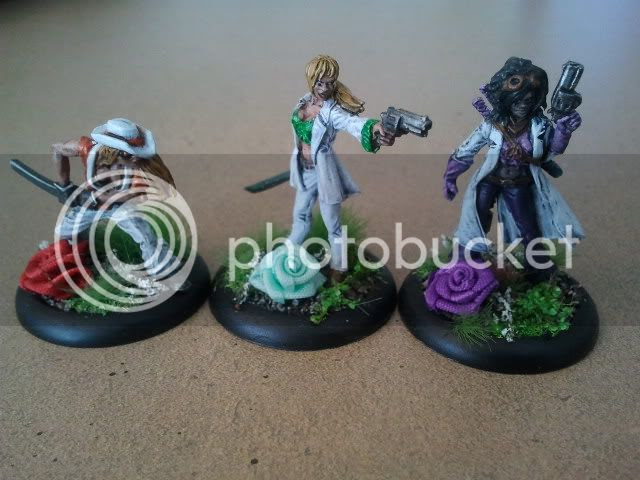 The game was actually almost decided on the first turn, when a reactivated Tara unburied the Nothing Beast to charge Blood Vik. Flipping double severe on the negative flip almost killed her, but he failed to connect with the last attacks to finish her off. On the second turn I thankfully got initative, and proceeded to pull Blood Vik back to safety and annihilate the Nothing Beast with her Sisters-in-fury/Mark-of-Shezuul powered melee attacks.

After that, and with John left without an alternative heavy hitter, it was mostly a cleanup job for the Viks, as they cut their way through whatever they could reach. Bishop was temporarily locked in a Death Marshall’s coffin for two turns until he was rescued by the Blood Vik Slaughtermachine, The Ronin eventually went down to Void Wretches and by the end of the game, Tara was left alone, planting scheme markers for breakthrough while a Convict Gunslinger Rapid Fired uselessly at her. 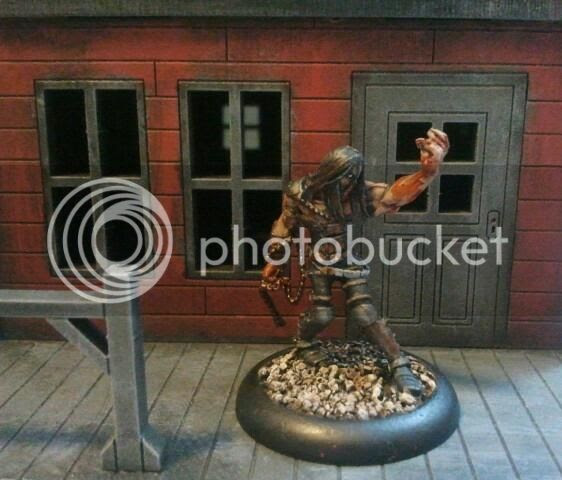 When a problem needs a fixing, you call Bishop.

Glass Cannon – I don’t think there’s a more apt description for the Viks. Between the two of them, the Viks were able to hunt down and easily kill any model within their threat range. In fact the only reason Tara lived was because she sprinted away and the game ended before I could bring the Twins to bear. Conversely, the Turn 1 showdown between Ash Vik and the Nothing Beast really highlighted how vulnerable they were to a counter-attack. Admittedly John got lucky when his first attack dealt severe damage on a negative flip but if he’d hit Ash Vik a little more consistently, taken the Oathbreaker upgrade or gotten initiative on Turn 2, Ash Vik would have not have survived and the game would have been much closer. So the morale of the story here is not to let your opponent get the jump on your Viktorias!

As it turns out, the Malifaux Child was not quite as useful as I’d hoped. His healing action (together with Blood Vik’s heal from Into the Fray) helped Ash Vik recover from her run-in with the Nothing Beast and get back into the fight. However I wound up using “Just like You!” to cast Sisters in Fury (for +2 Dg) far less often than I thought I would. In most turns I was attempting to activate the Viks as soon as possible, so spending that extra activation to “prime” them with a Malifaux Child just wasn’t worth while. I still don’t regret taking the Malifaux Child over a Student of Conflict (who would have had the same problem – activating before the Viks to hand out Fast), but he’s certainly less useful than I thought he would be.

While it did take me a while (not to mention some thread-reading!) to figure out how I wanted to equip the Viks, I was pretty happy with the upgrades eventually did choose. The insane damage potential I got out of Blood Vik was thanks in no small part to Mark of Shez’uul, Sisters in Fury and Oathkeeper. And while it basically cost me 3SS and two upgrade slots, the ability to Slingshot Blood Vik to where I needed her with Sisters in Spirit and Synchronised Slaying was well worth the expense.
The alternative setup I was thinking was to basically replace Sisters in Spirit and Synchronised Slaying on Ash Vik with Oathkeeper and something else. The idea would have been to ensure that the two Viks were able to work independently of each other, so that if one died I hadn’t spent a bunch of soulstones on upgrades that only worked when the Viks were paired up. I’m not convinced it’s as good as the setup I chose for the game, but it still might be worth a try some time.

For the rest of the crew, they performed okay, but their own efforts really paled in comparison to the Viks. Both of the Ronin got themselves killed and when the Convict Gunslinger brought his guns to bear, he had to either shoot into combat (and hit the poor Ronin more often than not) or shoot at Tara (who’s notoriously good at redirecting shooting attacks through the hole in her chest). Bishop did well, taking down a Void wretch but ended up stuck in a Death Marshall’s coffin for the next two turns. Once he was finally rescued by Blood Vik he was nowhere near the enemy, so he spent the last two turns scampering off to claim a VP for Outflank. I still love Bishop and in fact he remains one of my favourite Mercs, but the Viks really didn’t leave him with much else to prey on! 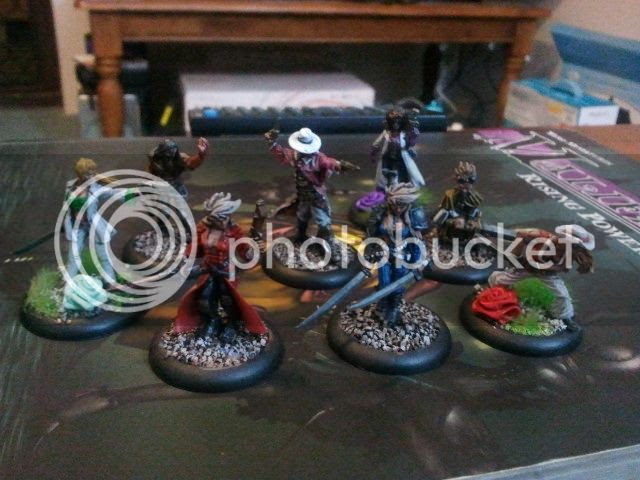 An old pic of the crew, but much nicer than the recent one!

Overall, I feel like the Viks have much more depth to their playstyle than they did in 1.5. Their various tactical actions and abilities really make you think about when you activate each Vik and where you want them relative to each other, especially when they’re so vulnerable themselves. But when it comes down to it, there’s still little more to them than just killing things. There’s no doubt that they do it extremely well, but I feel like it’s a kind of playstyle that I’d get tired of after a while.

Probably the biggest saving grace of the Viks’ one-note playstyle is the Mercs they tend to take in their crew. I often think of the Viks as a crew of heroes, since the available Mercs tend to be both oozing with personality and have very unique playstyles. So while the Viks might not have much else to them, the variety of different playstyles on offer with the Mercs they hire keeps the crew interesting.

Anyway, at this point I feel like the Viks are a crew I’d want to use only occasionally. They’re great fun to throw on the table but much like chocolate, there’s only so much Sister-related carnage that I can take! Compared with the other Outcast Masters I’d rate them as my second least favourite at the moment, right in front of Von Schill. I really hope a game with Von Schill will change my low opinion of him but that, of course, if for another blog post!