Once again, it’s been an age since my last blog post. :( Hopefully I’ll get back to some regular posting at some point but until then, it’d be foolish of me to make promises! 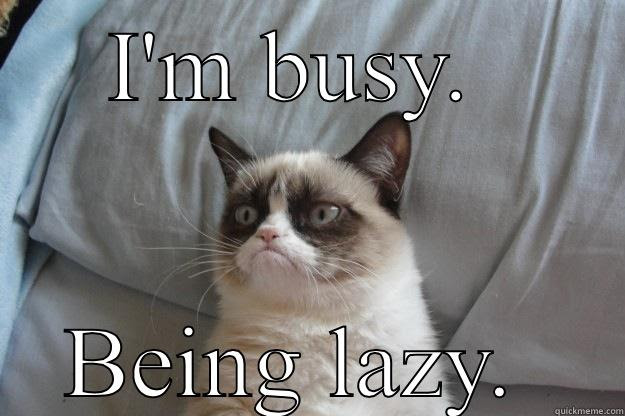 Anway, so what have I been up to in the past few months? Well last I spoke, my gamer ADD was in full effect and I was ready to give up on my Faction of choice at the time – Ten Thunders. Over January I decided to try out a few random Masters for my collection, swapping between Lucius and Perdita for a bit, then dabbling with Ressers. It was entertaining for a while, but before long I felt the urge to stick with a single faction again, even if only because I wanted to bring a Faction I was familiar with to Gencon this year! As it turned out, this led me back to the Ten Thunders, so yes – I’m back to playing with ninjas and samurai and other glorious Asian-themed stereotypes again!

So for this blog post I could wax lyrical about what I think of the Faction, my love of Samurai and how Misaki and Yan Lo are somehow still my favourite 10-T Masters. But instead, I thought I’d take a different tack and discuss something a little more hobby-related! 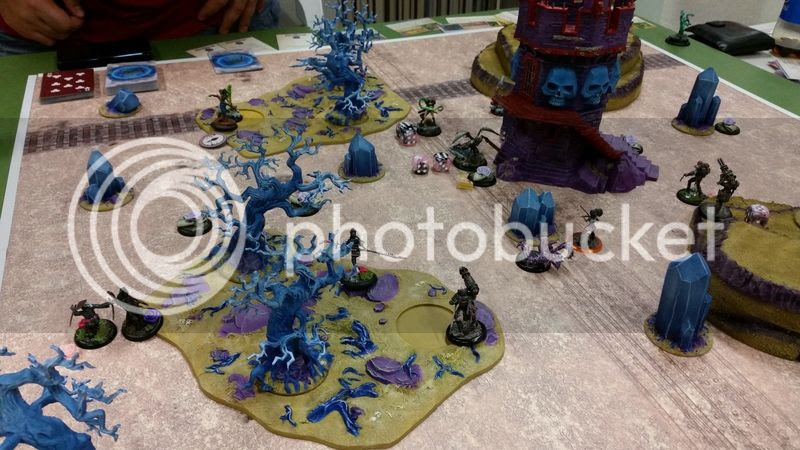 In addition to mauling innocent players in the face with Misaki, I’ve also been working away at filling out my model range to ensure I have every unit entry for the Ten Thunders. Of course even with Wyrd’s very fast release pace as of late there’s still a bunch of entries without an official model (especially from Book 3). So I’ve been forced to fill those gaps with proxies. Fortunately, conversions and proxies are something I love doing! So today I thought I might show some of those proxies off.

At least for today I’m leaving out the conversions I’ve done to official models, and the non 10-T models I’ve used for proxies. As usual this article is long enough as is, so perhaps that will be for another blog post. 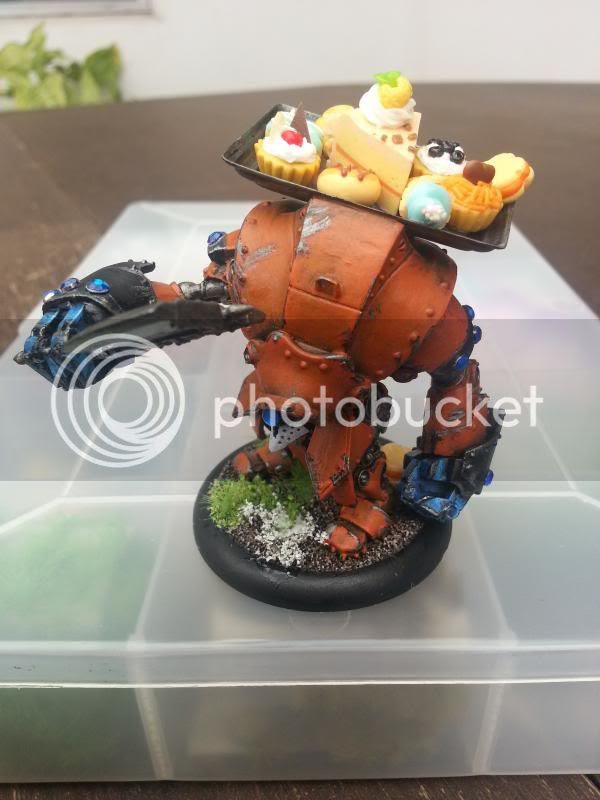 Rail Golem
I’ve never been a fan of the official Rail Golem model. Perhaps I’ll one day figure out a way of converting it to become more to my liking but until then, this has been my proxy for him! A converted Khador Warjack - one of the few models I actually like from the Warmachine range. Dubbed the “Cake Golem”, this guy belongs to one of my few non-pink crews  - the Mei Feng Cake Crew. 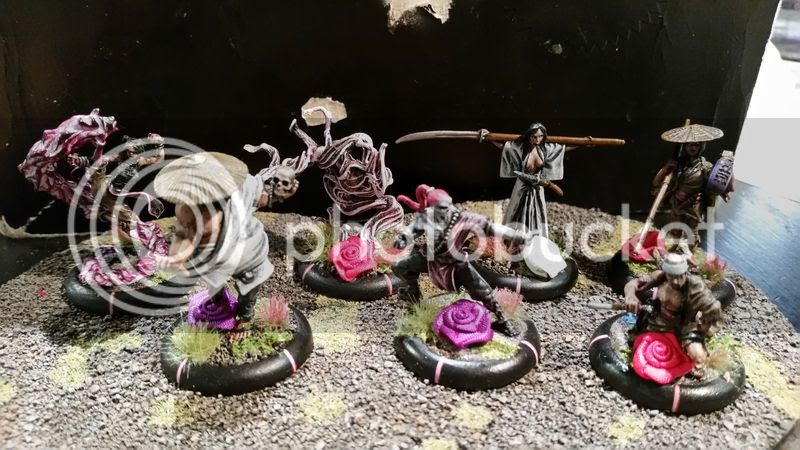 Shenlong & Friends
I bought these guys, all from the Bushido range, about two years ago when M2E book 2 originally came out at Gencon. Shenlong was apparently a long way off so I decided these would make for suitable proxies for his crew! As it turned out it was a full year (and shortly before Shenlong was officially released) until I finally got them all painted. My proxies for Sensei Yu, the Lone Swords(wo)man, the Fermented River monk and Shang all saw table time in other crews, but the rest never saw a single game before they were replaced with their official versions. 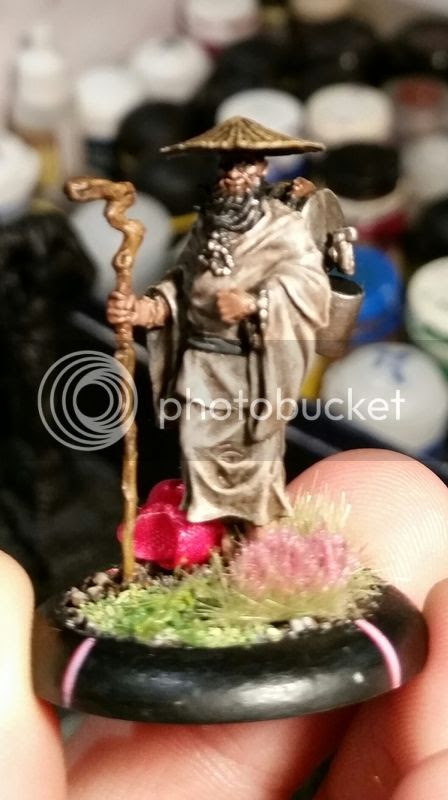 The only model still in use as a Malifaux proxy is my Fermented River Monk. At this stage, they're the only models I still need to paint for the 10-Thunders. So until that happens, this guy continues to see table time when I’m messing about with Brewmaster. 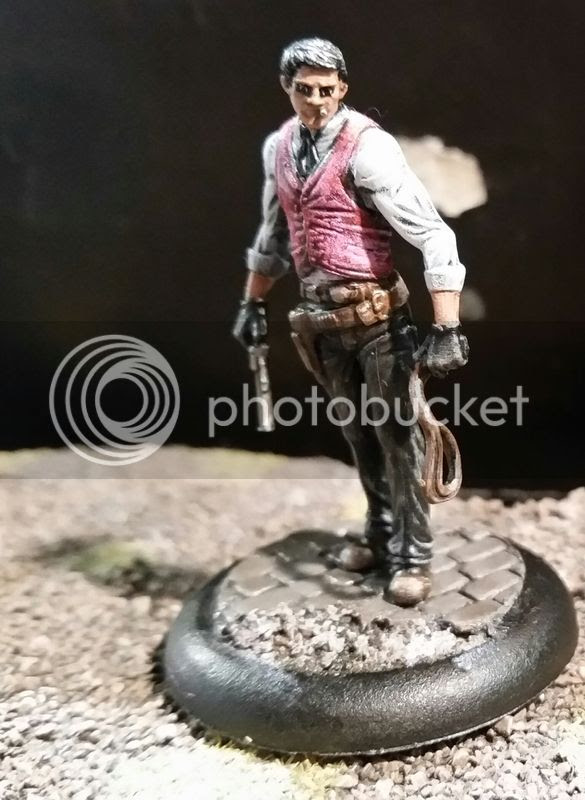 Master Queeg
You just have to love the Through the Breach character kit, right? :) Master Queeg was a necessary addition when I wanted to play McCabe, and at least from my one game with him, he didn't disappoint. Aesthetically I’m really happy with how this guy turned out, to the point that I may not even bother getting his official replacement when it comes out. 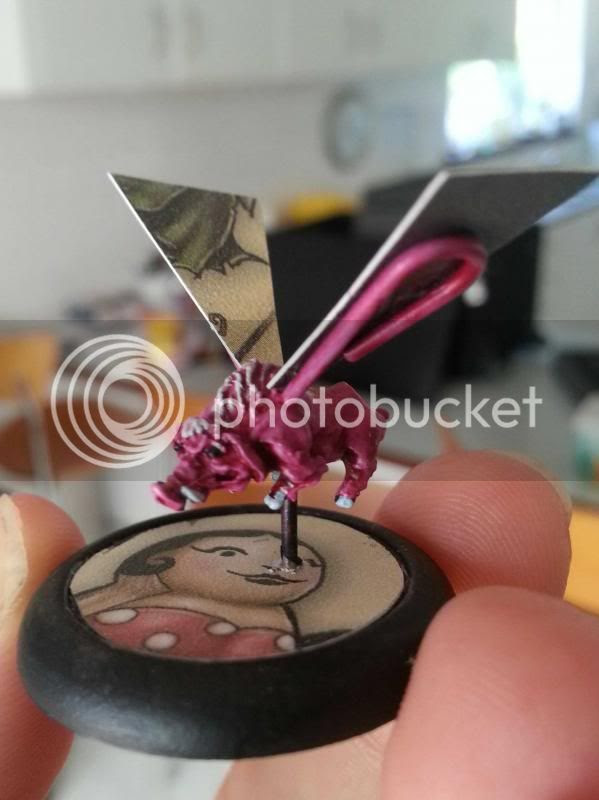 Tengu
I recently finished painting my official Tengu models, but until then these were my proxies of choice. The tiny flying piglets were originally Night Terrors for my Dreamer crew (back when Dreamer could actually take them). Sadly M2E rendered them obsolete (I already have some perfectly fine official Night Terrors), so they sat in my case until I discovered a need for Tengu. Thematically they’re a little out of place with the rest of the faction. But as tiny winged Demons it wasn’t too hard for my opponents to remember what they are, especially when they tend to leave a trail of scheme markers behind them! 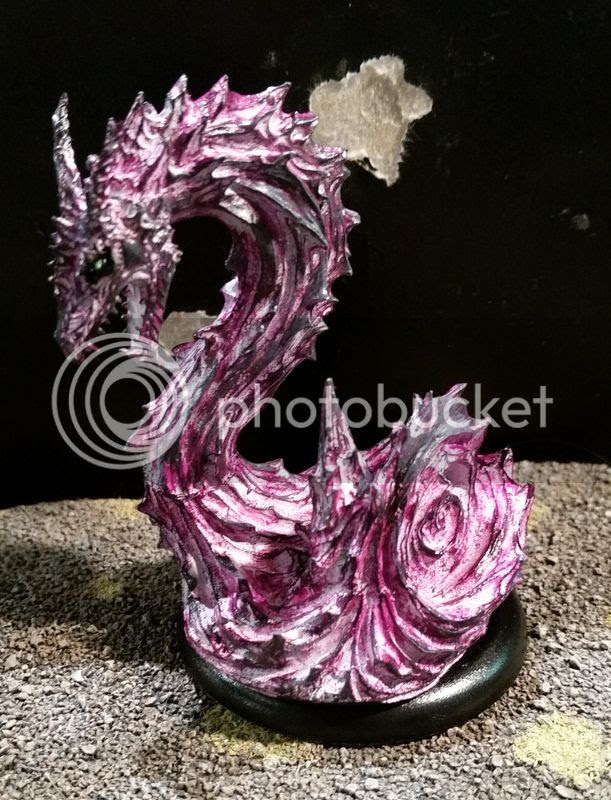 Shadow Emissary
Other Factions might have some easy options for official Emissary Proxies (ie. the old Avatar models), but the Ten Thunders remain pretty lacking in that regard. I know a lot of people have turned to the Bushido range for a suitable model. But for better or worse, I’m trying to stick with Wyrd models as much as possible. Aside from the Dawn Serpent, the availability of Wyrd Dragon-type models is pretty low, so I went for the only option available – Avatar Sonnia, sans Sonnia. It’s a chunky piece of metal and Resin, but it works pretty well – certainly nobody’s going to mistake it for anything else! 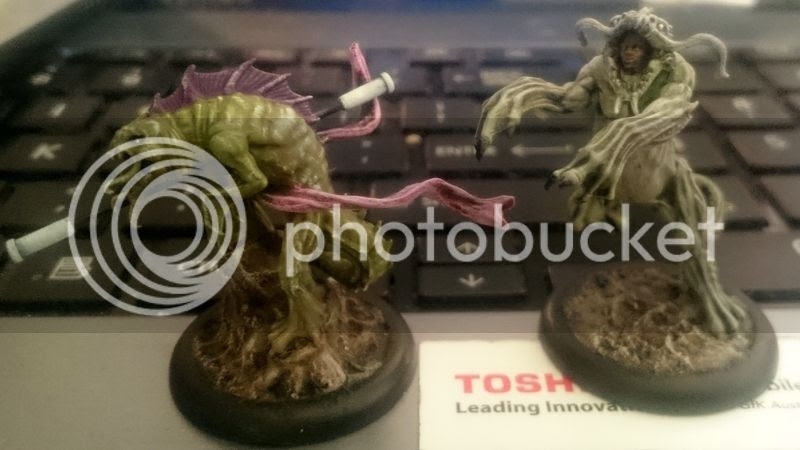 Wandering River Monk
I’ve always been a big fan of the humble Silurid, so you can imagine my excitement when the Ten Thunders got their own version! With almost exactly the same stats as their Neverborn counterparts, the natural proxy for them seemed pretty obvious…

The two models I made are basically a man in a Silurid suit (shh! don’t tell anyone!), and a genuine trained Silurid Monk. The latter is my favourite by far, to the point where I’ll probably not bother getting the official models if I can avoid it. :) 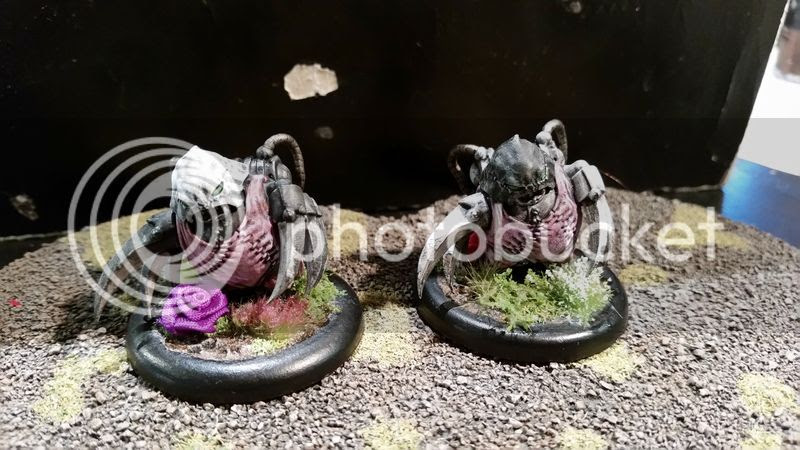 Komainu/Obsidian Oni
The Puppet Wars range has consistently been a great source of potential Malifaux proxies, and so this was where I turned when I needed to field some Komainu. The puppet Executioners are the chunkiest models available and fit quite well on a 40mm base, so they were quickly painted up and became my amazing, go-to minions for Yan Lo. :) It wasn’t long until I got the official Komainu models but rather than retire them, the puppet Executioners have found new life as proxies for Obsidian Oni. They’re a little less appropriate for what the Obsidian Oni are meant to be, but until I decide to go nuts and convert up some Samurai (or just wait for the sweet-ass models on their way), they do the job well enough. 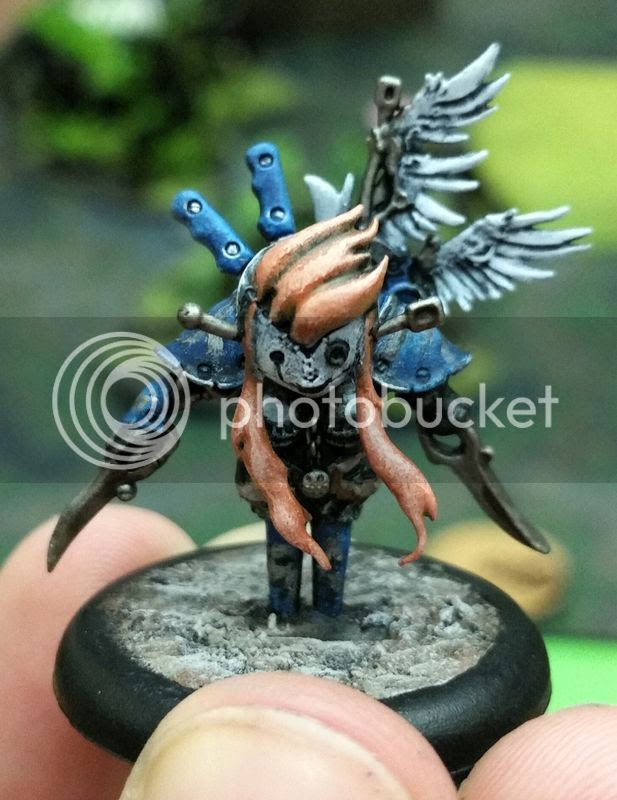 Bunraku
The Bunraku really seems like more of a Collodi minion, but as a dual Faction 10-T model it seemed necessary to at least come up with a model for him. Puppet Vik seemed the logical (and easy choice) and even seems to match thematically, so that was a bonus. The paint scheme is a notable deviation from my usual Pink, but it matches my Mei Feng crew (like the Rail Golem, above) and as a construct that’s the one crew I’m most likely to use him with. 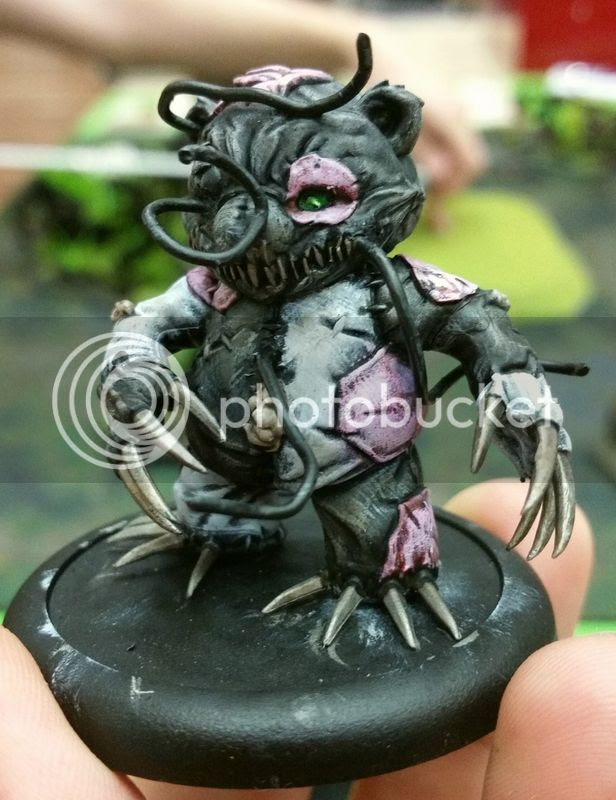 Jorogumo
For a long time I struggled with what I could use to proxy the Jorogumo. The Wyrd range is pretty low on Giant Spiders and my next best idea – converting up an Oiran, wasn’t really going to cut it for a Ht 3, 50mm based model. In the end, I’ve decided to forget about what they’re “supposed” to look like and go in a very different direction… I’m adding Teddy to the 10-Thunders. ;) More specifically I’m adding Miss Ery with heaps of creepy tendrils coming out of her, but with a decent paint job I think it will work. In terms of matching her with the rest of the Faction, having Puppet Executioners as my Obsidian Oni will help. And once the Jorogumo do officially come out I’ll be able to keep using this model as a Teddy for my Neverborn (because the 3 teddies I already have isn’t enough?). 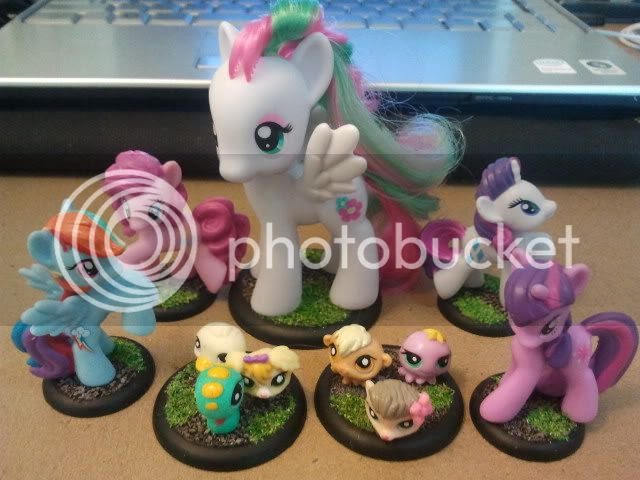 Mali-Pony Proxies. Not 10-T related, I just like dragging them out. ;)
The Rest…
So between the above proxies and my existing collection (both old metal and new plastic) there’s still just a few models I need to find Proxies for. At least until Book 4, that list consists of the Mounted Guard, Mechanical Porkchop and Sparks. I’m not too fussed about not having the Mounted Guard or Sparks, but the Mechapig is another matter. I’d love to add one to my Mei Feng crew but unfortunately I’m pretty stuck on how to make one. At the moment I’m not really using Mei Feng so for now, I’m happy to leave it be.

Anyway, that’s it for now!