Gremlin Zoraida, or why Dom is playing her all wrong...

Even if Jack Daw recently took first place, Zoraida was my first love in Malifaux and remains one of my favorite Masters in the game. So when Gremlin afficionado Dominc Westerland posted up a blog article about Gremlin-Zoraida, I had to check it out;

Basically, alot of people have been dissing on Zoraida lately ("Neither aggressive nor competitive"). I guess this prompted Dom to bring her out and see if he could make her useful as a Gremlin Master. His thoughts are sumarised in the above article, and anyone interested in Zoraida or the Gremlins in general should definitely give it a read!

But as I was reading it, I couldn't help but disagree with some of points he was making. Now normally I'd post a reply on the thread/article and leave it at that. But I'm in the mood for some writing so hey, why not write a blog post about it? ;)

Now first off, full disclosure - I haven't played Zoraida in a little over a year and my last game with her was my only one with her leading a Gremlin crew. By all rights, Dom is the better authority on Gremlin Zoraida. He's got far more experience with the Gremlin faction and has definitely played Zoraida more in the last 12 months than I have!

Still, one of the handy things about having a blog is that you can say whatever crap you want. So for better or worse,  I'm writing it. ;) 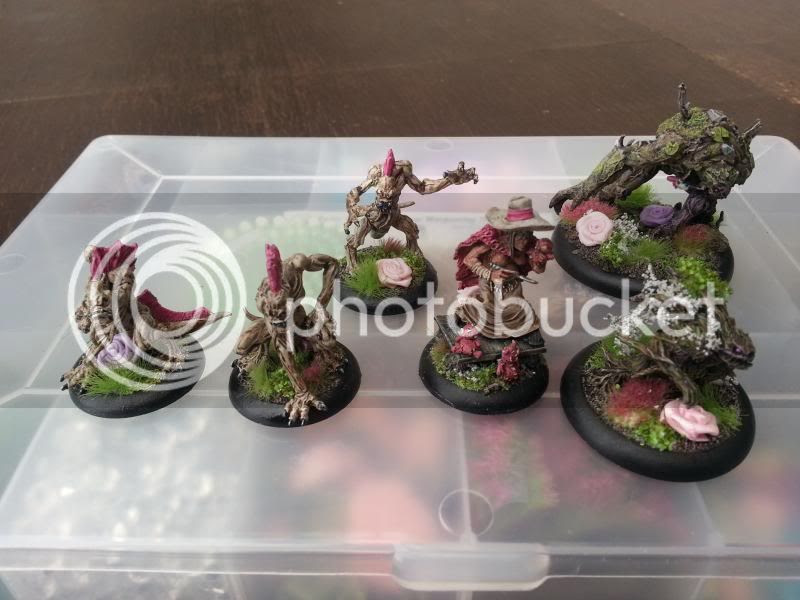 Probably one of Zoraida's most iconic spells, Dom's right in that Zoraida's Obey can be used on friendly models like a sort of AP bank. And he's also right in that those extra AP can make those models so much better at what they do.

BUT if you're only ever using it on friendly models then with the odd exception, it's a waste of a Master's AP. More aggressive Masters like Ophelia or Wong can spend their AP on attacks that are both more card efficient (no need to flip/cheat a 7 just to use it in the first place) and often more damaging. Moving models around is great but Ophelia can do that too (and still shoot the crap out of everything at the same time). In fact if spending Master AP to get your crew doing stuff is your thing, you're far better off using (to borrow Dom's analogy) the real Oprah of Malifaux - Lucius. Despite a few limitations he's far more efficient with his AP than Zoraida, since his Issue Command is almost always a 2 for 1 AP effect. Okay, sure, Lucius isn't a Gremlin Master but the point stands - Zoraida's strength does not lie in Obeying her own models.

Like I alluded to above there are always going to be instances where Obeying a friendly model will be well worth it, but I don't believe it's the best way to use her. So the key to getting the best use out of Zoraida's Obey, is to use it to turn your opponents models against them. This especially becomes relevant when you start combining Zoraida's Obey with Bewitch. 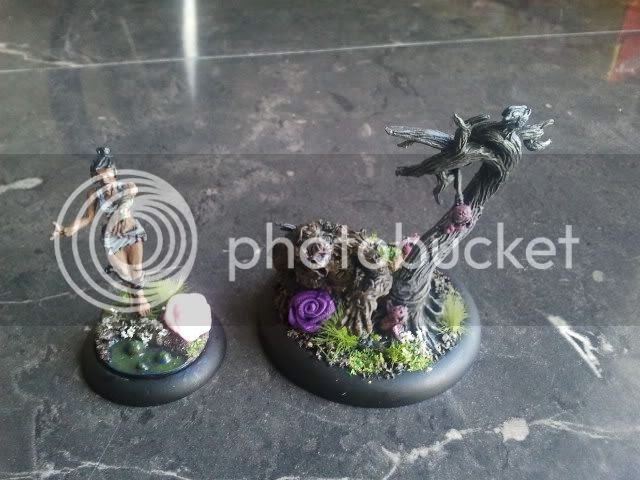 Put simply, I believe that Bewitch is one of the main reasons to play Zoraida. It basically adds a condition to an enemy model that lets you draw two cards whenever they walk, charge or make a non-charge attack action. Also note that you draw the cards before any duels resulting from the action, which gives you the chance to use them straight away! In an ideal activation you could Bewitch one target one enemy model, then Obey it twice to essentially draw 4 cards, and punch the crap out of another enemy enemy model. Then once that enemy model activates it will potentially net you even more card draw. Also because it lasts until the end of that model's next activation, meaning Zoraida can prime an enemy model with Bewitch at the end of one turn, and then reap the reward of all those extra cards in the next turn.

Why is all this card draw so great? It basically tips fate in your favour - the low cards you draw will never be flipped in a starting duel and the high cards can be cheated. It gives you much more control over your deck and thus makes it much easier for the rest of your crew to do exactly what you want them to.

The weakness of Bewitch is that aside from using Obey, your opponent can limit the cards you draw by Charging, or using tactical actions like Focus or Defensive. That's all well and good, but by changing what your opponent does you're still reducing the effectiveness of the model you Bewitched, not to mention that if you target a high-value model (eg. Killjoy or a Master), they're faced with the difficult choice of either not using them as well as they could, or giving you an ass-load of cards.

Activating the Bewitched model late would also limit the effectiveness of the cards you draw, but that in itself can work in your favour. Just target high-priority models your opponent will want to activate early. Once again that gives them a hard choice between leaving that model vulnerable for most of the turn or essentially doubling the size of your hand!

When I started playing M2E Zoraida I was not very impressed by Zoraida's Voodoo Doll. It cost a (2) action to summon so you generally had to spend a full activation just getting the Doll out. But over time I warmed up to it. It's an easy summon in turn 1, when Zoraida hasn't much else to do, and its potential to just wreck an enemy model shouldn't be underestimated.

In Dom's article, his main concern with the Voodoo doll was the investment required to mess with just one model - requiring Zoraida, the Doll and a Nurse to handout some very nasty condtions. But I don't think it's as bad as that. For one, after she's summoned the Doll there's nothing else Zoraida needs to do. At worst you might want to heal the doll up with the Tarot Reading upgrade, but otherwise I see the doll as a sort of fire and forget weapon. After turn 1 Zoraida has far better things to do than babysit her Totem. So you're really just left with the Nurse. Dom expressed doubt as to whether she's really worth the investment but for me, I think she is. With Bewitch your card hungry Nurse should have what she needs to get her Take your Meds triggers, plus the heal from the crow trigger reduces the need for Zoraida to take Tarot Reading to periodically heal the doll.

It's also worth noting that the Voodoo Doll can be hired. To be honest I've never really thought much of it. The choice to me comes down to whether those 3SS are worth 2AP from Zoraida in Turn 1. Right now I'd say no, but when I get back into playing Zoraida it's certainly something I'd like to test out. 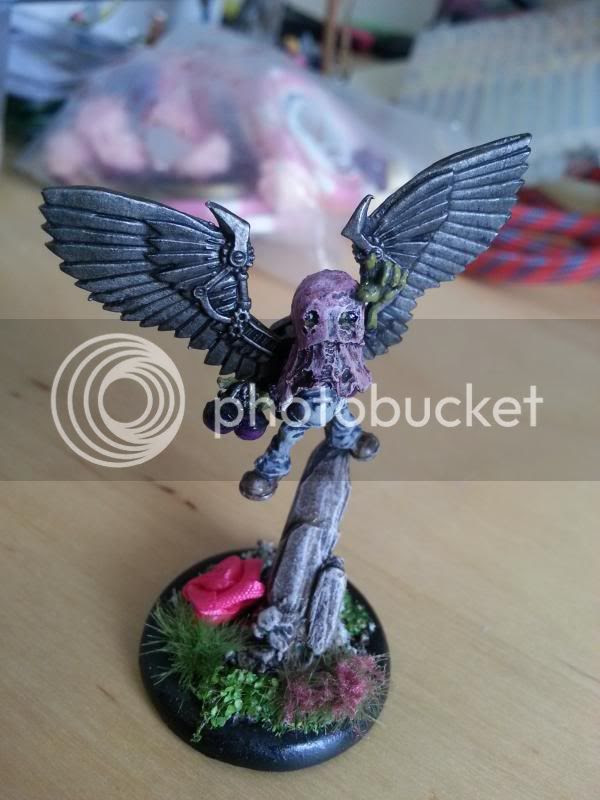 I don't have a pic of Iggy handy so here's the next best thing - my Merris Proxy!

Enthrall can be used to hire an interesting array of different models. But IMO the best by far for Gremlin Zoraida, even moreso than a Nurse, is Iggy. As a Neverborn it seems kind of silly to pay the Enthrall tax just to bring him into the Gremlin faction, but I think it's worth it. For one, Burning from his Ignition attack is a great condition to put on a Voodoo Doll. It basically deals the Hemmed model double damage from the Burning Condition - one from the burning condition and one the voodoo doll taking damage from it's own Burning condition (note: Merris would be good for this too!). He's also got Incite, a (0) action that grants the Mood Swing condition. This lasts until the models next activation, and allows you to choose that model to activate instead of another model your opponent might want to pick. Like Bewitch, if you put it on an activated model it lasts through to the next turn. So if you combine it with Bewitch you can force an opponent to activate a certain model early to net you some additional cards.

Incite is also like guaranteeing you'll win initative next turn. Whether you win or lose the initative flip, you can ensure your opponents first activation is a non-critical model, ensuring you'll be able to activate your own key model first!

Finally, there's Iggy's other (0) action: Throw a Fit. This is a simple -2Wp aura for unactivated enemy models. To be honest I've rarely wanted to use it over Incite, but it does work nicely with Zoraida's Wp-centric playstyle and if nothing else, it's another incentive for your opponent to activate certain (possibly Bewitched) models early. ;)


The Raven or the Magic 8-Ball

Zoraida has two limited upgrades - Animal Shape (lets her teleport a significant distance for a (2) action) and Crystal Ball (On activation either draw a card, force a discard or look at three random cards from the opponent's hand).

Dom's opinion on the two upgrades is that he felt Animal shap was the auto-include. Normally I would disagree, but I think his conclusion is due in no small part to what he's using Zoraida for. As Dom said, Animal Shape is great for when you want Zoraida to be super-mobile or evasive. And from what I gather that is pretty much why Dom picks Zoraida over other Gremlin Masters for certain strategies/schemes anyway. Still, if you've committed to Zoraida and you aren't playing a game where Animal shape is strictly necessary, Crystal Ball is definitely the way to go.

Of course the as Gremlin Master, Zoraida has the added advantage of getting her cake and eating it too, since Sammy LaCroix can simply take the Limited upgrade the Zoraida doesn't want (most likely Crystal Ball). Is it worth bringing in Sammy for this purpose? Having never played her I can't really be sure. But the rest of her card seems custom-built to synergise with Mamma-Z, so I suspect the answer is yes!

...Dom is wrong. ;) But he's also right! The overall conclusion of Dom's piece was that Zoraida is very competitive in the Gremlin Faction. On that point I absolutely agree with him - Zoraida is awesome. I wrote this article because I disagree on some of the specifics, but only some. I absolutely agree with most of the other points Dom made about her strengths/weaknesses, and how she can be used.

Anyway, I think the take home message for me is despite not playing her for more than a year, I still really, really like Zoraida. Right now I'm focussing on the Resser faction with my "Year of the Crow" but if I'm being honest, my eyes have already started to wander. I've yet to make any decision about what to play after I'm done with Ressers, but I'm starting to suspect my future will involve a saggy-breasted old woman with a penchant for sticking needles in things... ;)