My aim with the Rainbow Challenge this year has been threefold – Play all the masters (going well), Paint lots of crews (falling behind, but not a disaster yet) and keep up to date with this blog. That last part has been….um, a bit of a challenge, made all the worse by my insistence that I write 2000+ words every time I post something up!
At this stage I’ve played no less than 6 Masters for which I haven’t yet written anything for my Blog! This simply won’t do, so to recitfy this I thought I’d make this a bit of a Catchup week. So for the next 6 days I’m going to post up one article each day for each Master I still need to write about – Lucius, Pandora, Collodi, Lynch, Rasputina and Kaeris! In order to make this feasible I’m restricting myself to no more than one hour of writing per article. Well, hopefully not much more than an hour at least. :P So here goes…

Rasputina is not a Master I’ve ever been excited about. Her static playstyle has never appealed to me, she’s always seemed like an easy Master to take down (just get her in melee) and I just never liked the old metal models. In the new edition Rasputina got some much nicer models, but that weakness in melee and static playstyle was still there, so she’s never really piqued my interest. So much like my game with Lady Justice, I went into this match with a certain expectation of how dull I’d find her.

Today was a rematch against Chris (Kadeton on the Wyrd forums) and his Viktorias crew. 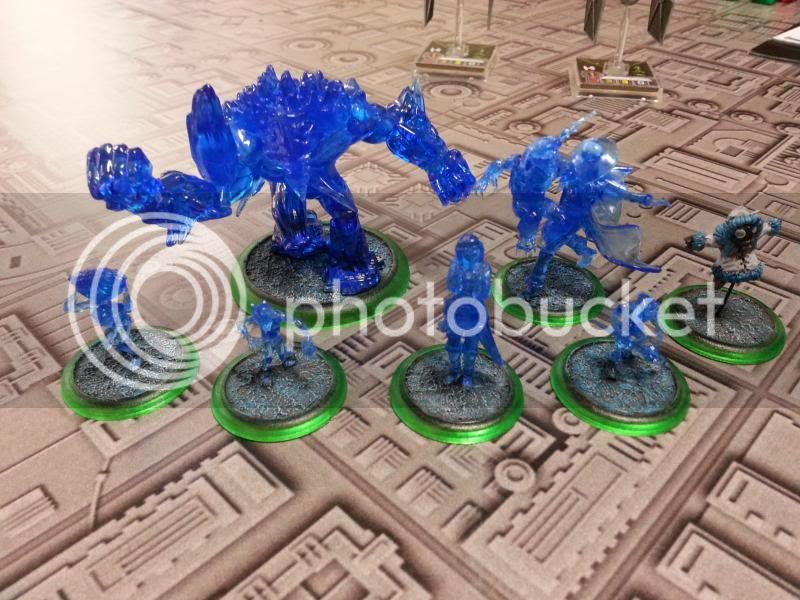 I have to say I was pretty relieved when the transparent plastic Rasputina crew was made available. While I might be forced to play her for the Rainbow Challenge, at least I wouldn’t have to waste time painting her! I initially thought I’d use the blue transparent bases, but eventually decided on green as a contrasting colour, then a turquoise sort of colour for the snow/tundra to bring the blue/green together. It’s arguably the simplest crew I’ve ever painted, and the effort I put in probably matches my excitement for this Master. ;)

The December Acolyte was just a metal puppet wars mini I’d already painted, so I just stuck him on a base to match Raspy’s crew. I pinned him in the air partly to make it look like he was in mid-leap as he pounced on some hapless victim, but mostly because he broke off the base while I was gluing him! 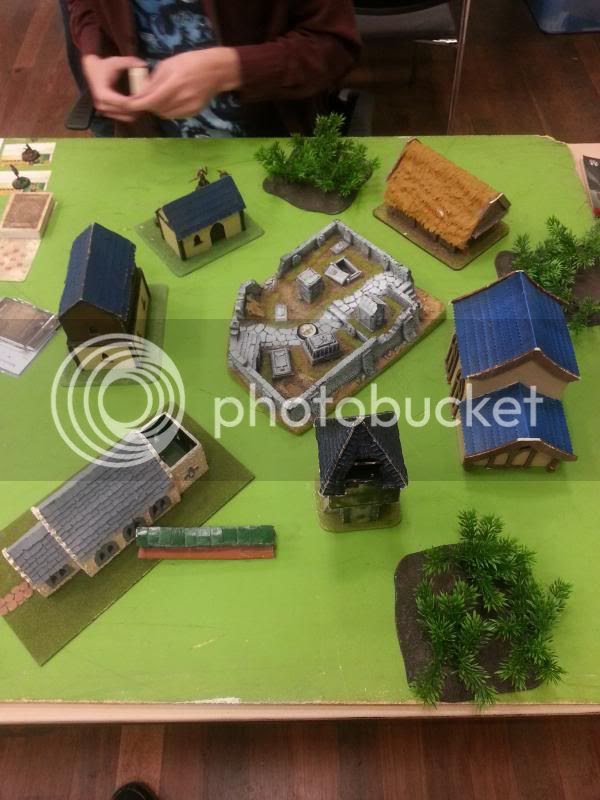 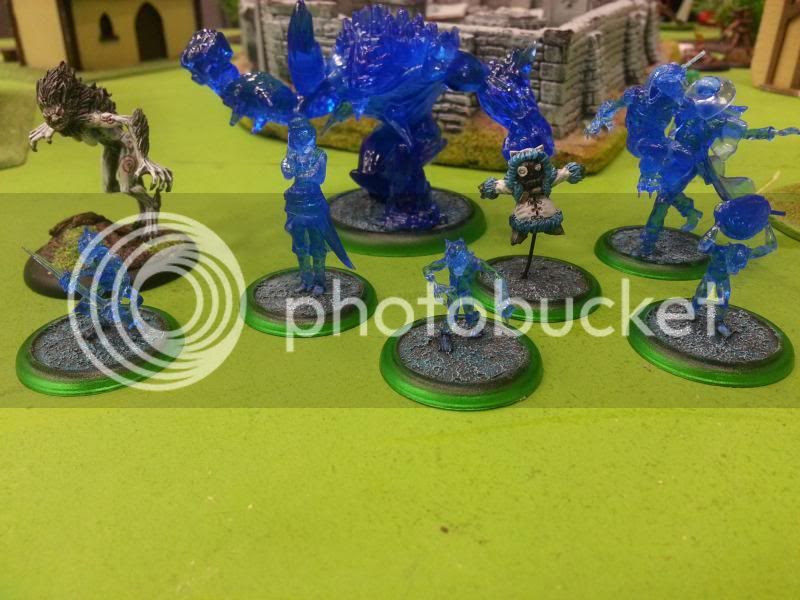 Oddly, the green bases almost make her fit with the green board colour. Almost.
The List

I figured the December Acolyte and Blessed of December , (Imbued Energies) would help with the Rasputina’s low mobility, otherwise I just stuck with Raspy’s Starter box. I always figured melee was Rasputina’s weakness, so for her upgrades I went with Sub Zero and Armour of December, then Arcane Reservoir because you can’t go wrong with an extra card in hand!

With both crews pushing forward, Chris chose to advance more cautionsly to stay out of Raputina’s potential threat range. The December Acolyte and Raspy herself scored an early kill against a convict Gunslinger who strayed too close, but otherwise most of the Viks crew endeavoured to stay outside LoS.

In the second turn, the Ice Golem saw an opportunity to charge Lazarus, leaving Raspy’s side to do so and dealing a moderate amount of damage to the construct. Vanessa and a Convict Gunslinger joined the fray to bring the Ice Golem down to three wounds, but the main event occurred at the end of the turn, when Ash Vik used Dragons bite to place herself and Blood Vik into base contact with Raspy. The resulting two attacks came very close to killing Rasputina, who then responded by pushing out of melee with Armour of December and blasting both with Decembers Curse! The Blessed of December leapt in to finish off Ash Vik, and Blood Vik soon followed when I won intiative in turn 4. At that point, with me having scored an extra point on Recon and achieved both my schemes (Protect Territory and Assassinate), Chris figured the VP difference was now insurmountable so we called the game. 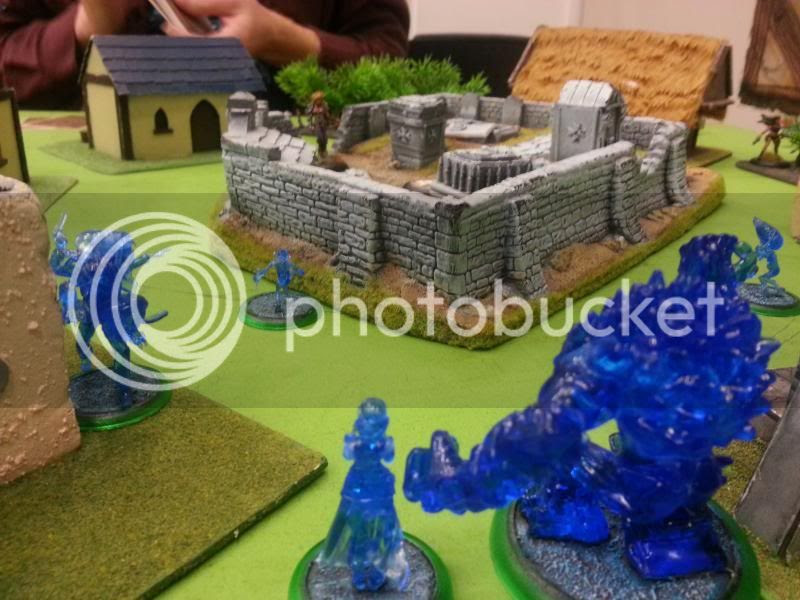 You know I never thought I’d ever say this, but I actually enjoyed playing Rasputina! Not just because I like playing Malifaux, but because I actually, genuinely liked how she played in-game! Yes, she still had that static playstyle that I generally dislike, in fact she only moved about 12” the entire game (and even that was 6” forward, then 6” back). What I didn’t count on, however, is the sheer board control that Rasputina commands with her and her crew. The fact is, Rasputina doesn’t need to be fast. With Ice Mirror and a crew of Frozen Heart models there are few places Raspy can’t reach with her spells, and in fact Chris had a very difficult time keeping outside of Raspy’s threat range early on. That ability to respond to threats from half way across the board keeps Rasputina flexible and difficult for your opponent to avoid. Even her traditional weaknesses toward melee can be dealt with, in a sense…

I’ve previously played against Rasputina a few times, and each time I won handily just by getting the biggest threat, Raspy herself, engaged in melee as quickly as possible. With that in mind, I thought I’d take a crew that would help deter enemy melee models. As it turns out it’s not only possible, but is an integral part of how Rasputina now plays. The exploding Ice Golem and Gamin are a part of that, as is the potential to give Sub Zero triggers to your Frozen Heart models to further deter melee attackers. But the real winner for me was the Armour of December upgrade. Raspy’s inability to do much in melee was the main reason I chose Armour of December over Shattered Heart as her Limited upgrade, and in this game I did not regret that decision at all. Put simply, Armour of December is what won the game for me and without it, Rasputina would have died a horrible death at the hands of the Viks. So as far as I’m concerned, Armour of December is an auto-include. Shattered Heart is good sure, but the 3” push from the Armour is the easiest way to get her out of melee, without which she’s almost useless when engaged.

To be honest I didn’t get a lot of use out of most of Raspy’s other facets. I forgot she even had Counterspell until right now, and I never had a chance to take advantage of Freeze Over (for paralyse) or December’s Touch (the armour buff). Chris mentioned his woes against a Rasputina player who took full advantage of Freeze Over to paralyse models though, so I’ve not doubt it’s effective. Especially if I can combine it with the Wendigo’s Devour! Unfortunately for this game, the opportunity never came up. I will say that I’m not impressed by Biting Chill though. As her only (0) action I guess it’s better than nothing, but ultimately it just feels like a throwaway spell – use it if you’re in melee, otherwise it’s not worth thinking about. I certainly wouldn’t go out of my way to trigger One Thousand Cuts; 1-2 extra damage from another cast just doesn’t feel worth it. 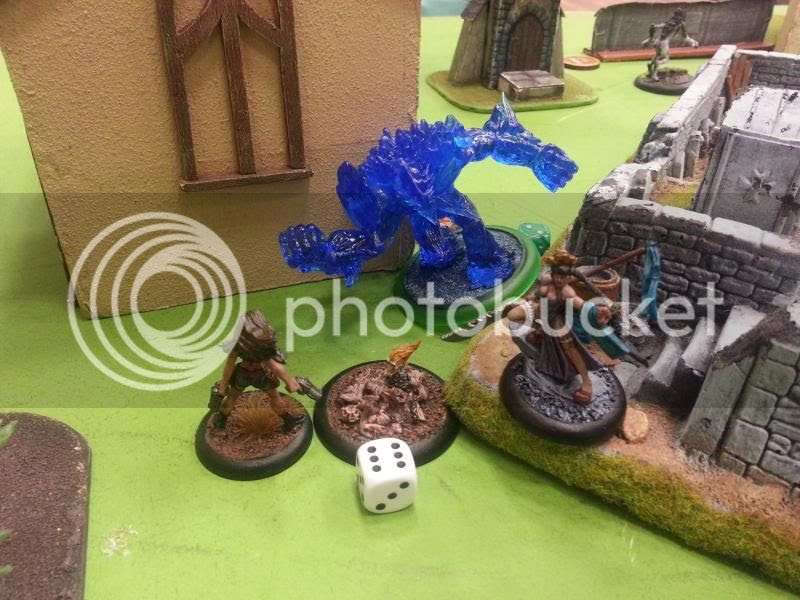 Mr Golem takes on Vanessa (proxied), Lazarus (proxied) and a gunslinger (not proxied!)

Ice Gamin – they’re cheap, they explode when they die, they can boost the damage output of other Frozen Heart models and you can Ice Mirror Raspy’s spells through them. These seem to be the mainstay of Rasputina’s crew, and I can’t say I was disappointed with them. Combined with a Sub Zero trigger to ward off melee attackers they came across as a difficult model to get rid of without exposing the attacker to getting horribly mauled by the rest of Raspy’s crew. So while they didn’t do a lot, their potential was enough to make Chris wary of tackling them.

Like Rasputina, I was very sceptical about the Ice Golem at first. I’m not used to using melee-centric models as slow as the Ice Golem and if I hadn’t committed to taking Raspy’s starter crew, I probably would have replaced him with something else. Fortunately and also like Rasputina, the Ice Golem exceeded my expectations. He’s got good resilience, explodes when he dies and his melee output is great. Smash would have been nice to get off but his standard attack, with minimum 3 damage and an easy slow trigger, is still really good. I’m still not super-keen on his speed but in this game I mitigated that with Imbued Energies, which I felt is more than worth the expense! 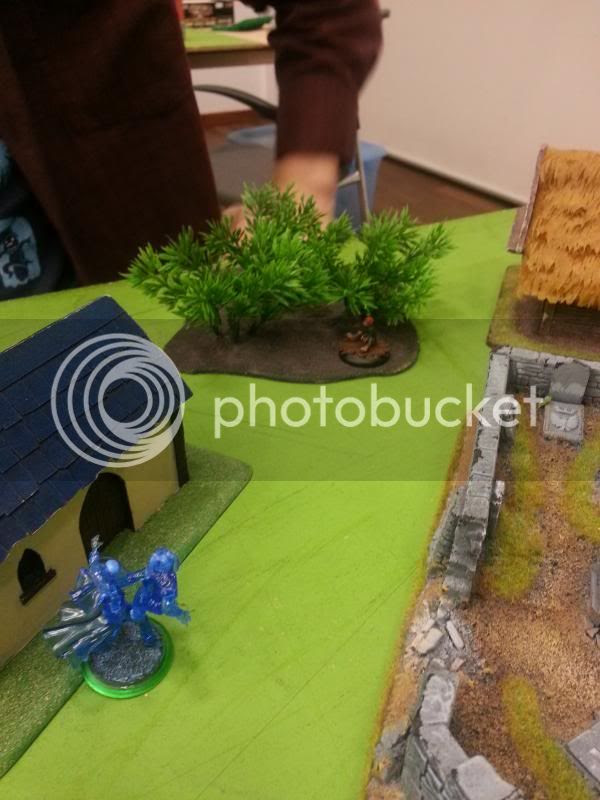 Dragging along his Guild friend, the Wendigo hunts down his preferred prey - a defenseless Malifaux child. ;)

The Wendigo is a 3SS minion with a Wk of 6, magical Extension to cast Raspy’s spells, Devour, and the potential to give his Master fast. For 3 SS. That’s 1 SS less than an Ice Gamin. Honestly, I don’t see a reason not to take this model, and that’s all I have to say on that!

After the game Chris commented that he was initially only concerned about dealing with the Blessed of December and Rasputina, however in his own words, “That December Acolyte is fucking nuts!”. And at 7SS for a From the Shadows model who easily throws out slow with his attacks, I have to agree. In this game he helped shoot up a Convict Gunslinger and forced Chris’s crew to give him a wide berth thereafter (melee wasn’t an option when the survivor would almost definitely get evaporated by Rasputina in return). I could go into more detail on why he’s so good but honestly, I’d rather just link Dave’s (sssk) blog article where he goes into much more detail;
http://playitlikebeatdown.wordpress.com/2013/12/08/december-acolyte/
Suffice to say, December Acolytes are the ducks nuts. :) 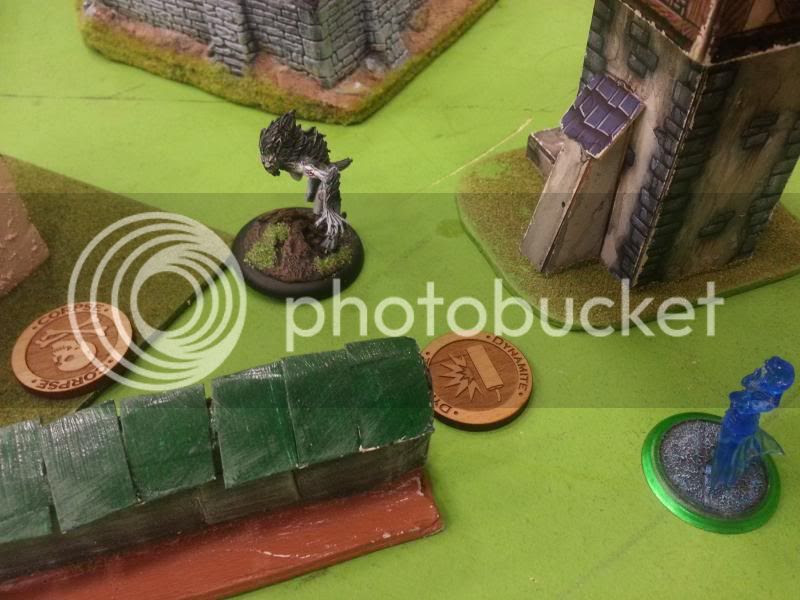 Two scheme markers - the remnants of the Viktorias

I’ve used the Blessed of December before, and as far as I’m concerned she remains a great model. Highly mobile, with Ml 7, healing and some great triggers make her a very solid model to throw around, and I definitely appreciated her presence in my game with Raspy. Originally she was going to be my flanking piece but after that flank was covered by Lazarus (not a good target for the Blessed), he wound up hanging back to wait for an opening. In the end he was instrumental in helping to take down the Viktorias, where her Ml 7 made it much easier to win the duels and deal those last bits of damage. 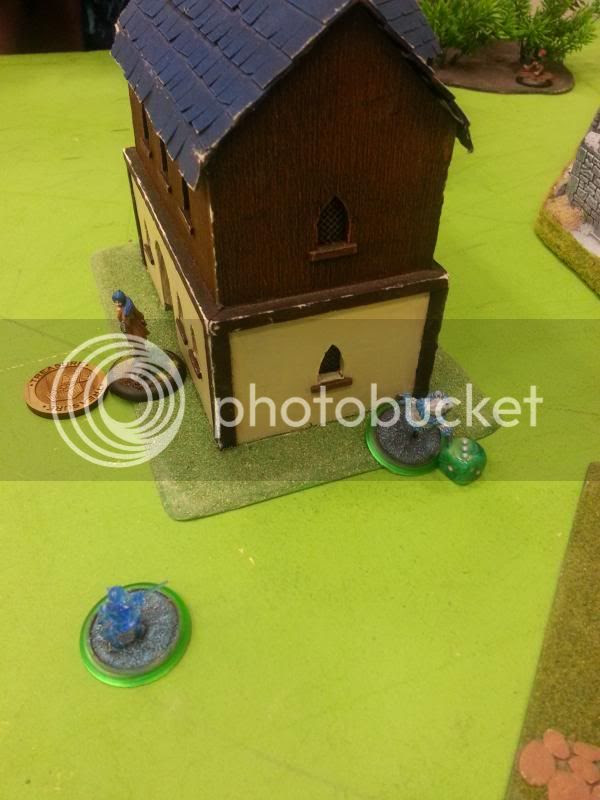 It’s interesting to compare Rasputina with her closest counterpart – Sonnia Cridd. Both are a little like living artillery pieces but while Sonnia’s crew has better anti-magic and melee capabilities, Rasputina favours resilience in the form of armour, and debuffs like slow and paralyse. Both have the kind of threat ranges that force you opponent to make difficult decisions about how to tackle your crew and to my surprise, it’s a playstyle that’s I’ve actually enjoyed. If nothing else, without a crew of super-mobile models (which has been my usual preference) it forces me to put more thought into how I deploy and advance my crew, which in itself provides a nice challenge. But with the long ranged reach of Rasputina (and Sonnia) I don’t feel forced to play in a big blob, which thus far has been the only playstyle I’ve disliked in Malifaux.