At this stage I’ve played no less than 6 Masters for which I haven’t yet written anything for my blog! This simply won’t do, so to recitfy this I thought I’d make this a bit of a Catchup week. For the next 6 days I’m going to post up one article each day for each Master I still need to write about – Lucius, Pandora, Collodi, Lynch, Rasputina and Kaeris! In order to make this feasible I’m restricting myself to no more than one hour of writing per article. First up is Lucius, although I’ve already written a bit on him so I guess this is kind of a cheat day. ;) 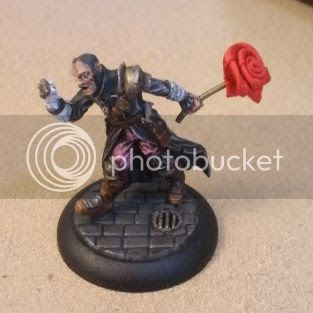 Drill Sergeant Dash, filling in for Lucius in this picture. ;)

The Master
Being a dual faction Master, I had a choice of using Lucius as either Neverborn or Guild. However I’d already tried Lucius as Neverborn in the playtest (well, Guild as well but that was in his very early, near-useless incarnation). With their great array of solid minions to choose from I feel like I know what I’d do with Lucius in Neverborn. So instead I thought I’d take him as Guild and see if I could make him work with his Guardsmen.

My Lucius game was played against regular Kyle who once again chose to use McMourning, this time as a Guild Master. Clearly the good Doctor had some explaining to do about his plastic surgery job on Lucius’s face! On this particular game I’d decided against dragging my massive Breach Bag along and instead went with a reduced selection of models that could fit into my PACK mini carry case. This gave me a more limited selection of models to choose from, but I hoped it was enough to use Lucius without feeling I was handicapping myself. 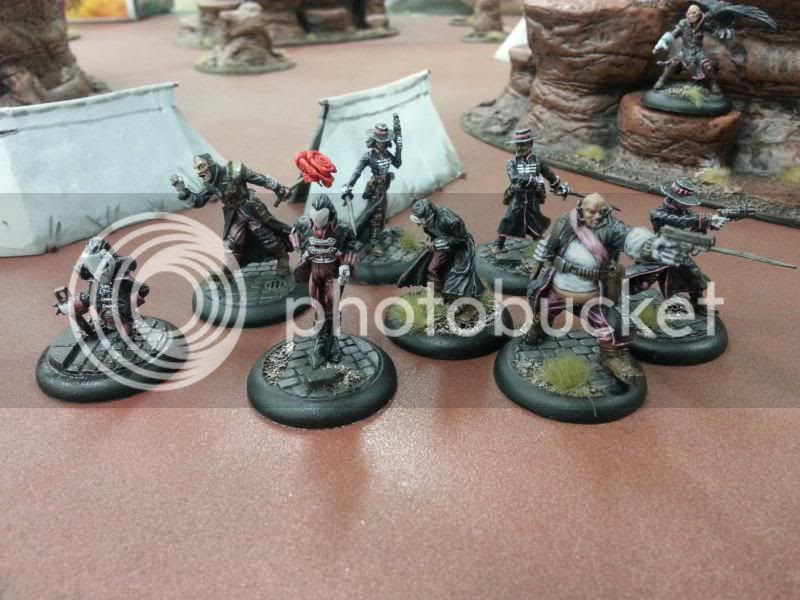 The Paint Job
I actually painted most of my Lucius crew somewhere off the East coast of Australia, on a Cruise ship! It was my first Guild crew, and arguably the first time I didn’t go too crazy on the pink either. The pink is still there, of course, but mainly as a secondary colour for the trimmings and the like. Since its original inception I’ve added Puppet Lucius as my Scribe proxy and the Guild Riflemen. One Guardsman model I’m missing (badly) is the Warden, whom I just haven’t gotten around to buying yet. Hopefully I’ll have him for Hoffman! 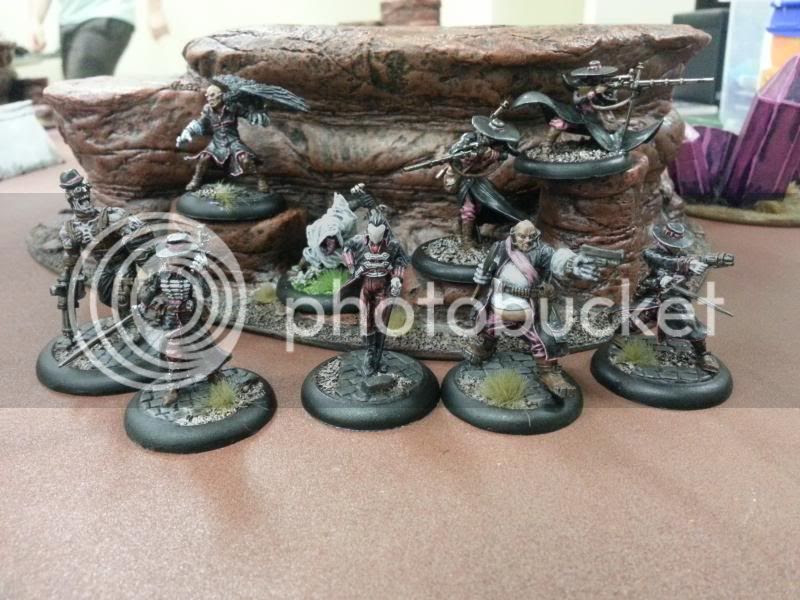 For Reckoning, I’d normally take a good complement of heavy-hitters for this but as above, I was sadly restricted to Lucius and the Guardsmen I’d taken with me that night. Lucius himself seems to prefer a crew of minions for him to order around too. Most of the Guilds hitting power seems to come from the enforcers and above however, so it seemed like Guild-Lucius was shit out of luck when it came to this Strategy!

In the end, I went with the heavy hitter I did have, Ryle, followed by a complement of Guardsmen in the shape of the Sargent, 2 Guardsmen and 2 Riflemen to take advantage of Lucius’s minion synergy. Finally there’s the Witchling Stalker and Guild Austringer, because they’re amazing. ;)

The Result
Basically Kyles crew ran at me, while I did my best to shoot them to hell! Kyle threw McMourning into my crew early on, which ensured his death but also brought Killjoy out! Needless to say he made a mess of anyone whom I didn’t manage to pull away with Lucius, and I spent the last part of the game running away and achieving/denying schemes. In the end Kyle managed to get VPs on Reckoning and Deliver a Message, but a surprisingly agile Ryle escaped the clutches of Sebastian to deny Murder Protégé. I edged out the win with VPs for Deliver a Message, Protect Territory and to a lesser extent, Reckoning. 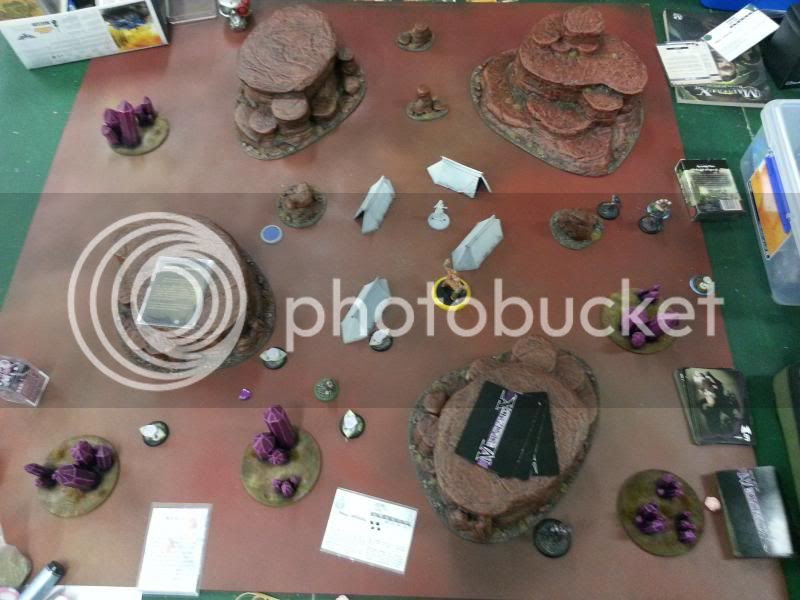 The obligatory table shot - this one's at the end of game
Post-game Thoughts
I could have put a Neverborn Lucius crew together in seconds but Guild Lucius? It turned out to be MUCH more difficult! The problem with Guild is that if you’re taking Guardsmen (and that’s pretty likely with Lucius), it’s difficult to balance your main line of Guardsmen (Guild Guard, Austringer, Riflemen etc) with the great support options you can also take. Captain Dashel and the Guild Sargent , you are presented with this array of great support models for those Guardsmen. Captain Dashel and the Guild Guard Captain are the main ones, but then there’s the Lawyer for Wp duels and Hard to Wound, a Witchling for condition removal, Pistolero for the positive to Df duels, it keeps adding up to the point that you end up with too many support models for a meagre selection of Guardsmen. And god help you if you want to throw in a heavy hitter, like I did with Ryle! Finding that balance was the main challenge when designing my Lucius list and while I think I managed to do that, I went through quite a few iterations to find it.

Speaking of list building, I also toyed with going down the Mimic path, using the Scribe and other mimics like Graves, Tannen the Doppelganger and the Lawyer to synergise with each other and especially the Useless Duplications upgrade. In a less kill-oriented strategy I would have liked to give this a good shot, but I didn’t think this was the game for it. 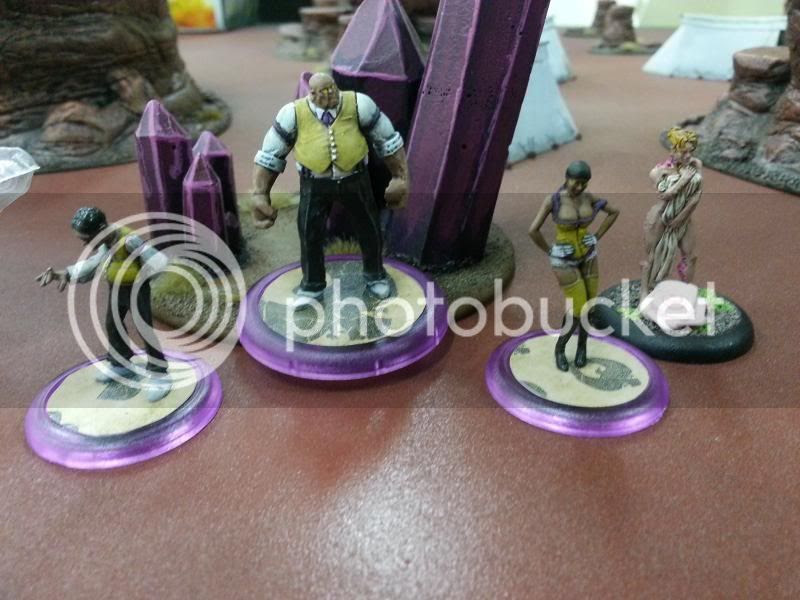 One day you'll have your time in the sun my pretties...one day...
Lucius himself was definitely fun to play. With Commanding Presence and the triggers from Issue Command, his ability to get multiple actions out of a single AP was phenomenal. In fact that AP efficiency is a big part of why I’ve enjoyed playing him. His Issue Command might not be as flexible as Obey (specifically, you can’t target enemy models) but damn, it lets him do A LOT with his crew! Reinforcements proved invaluable too. Early on it allowed me to get a Rifleman into position to shoot up an exposed enemy Lawyer, and then later on it got him out of Killjoy’s kill-zone to plant scheme markers for Protect Territory.

In this particular game I didn’t find myself with much need for Lucius’s upgrades. Without any Mimics and as a support Master (and without Assassinate), Surprisingly Loyal didn’t seem necessary, and I’m not yet convinced as to the value of the melee attack from Secret Objectives. With the right Schemes I might have taken Legalese, but ultimately I just stuck with Watch your Back and Secret Assets. The crew-wide Accomplice from Watch my Back  felt well worth it, and gave me some good options for chaining model activations together before Kyle could respond. Unfortunately, Secret Assets was pretty mediocre. Without any other (0) actions it’s not as if the Hidden Sniper action is competing with anything else Lucius could do, but at least in this game it never seemed to do all that much. I’d probably still take it in games though – if nothing else I like the idea of Lucius having this extra guy, hidden away just picking off targets with a sniper rifle. :) 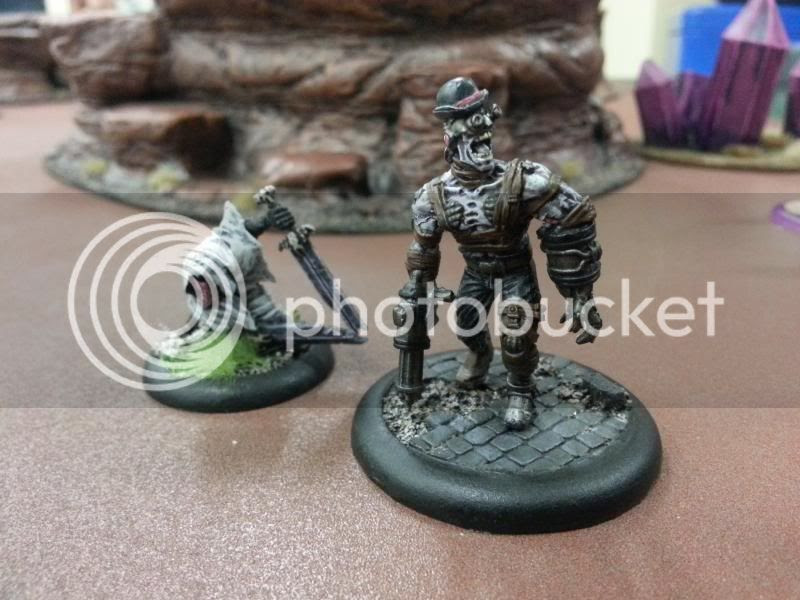 The rest of the crew performed about as well as I’d hoped. Ryle certainly has a nasty punch to him, but I admit I underestimated just how nasty Sebastian’s poison tricks were so in the end he wound up just keeping away from everyone to deny Kill Protégé. The Guild Guard and Guild Sergeant both did okay, even though they ended up as fodder for Killjoy and McMourning but the standouts were the Riflemen! I’ve played against these guys once before, when I saw a pair wipe out Fransisco in one turn and in this game they were definitely my main damage dealers. I quite like that they can keep their Focus conditions from turn to turn and when they do finally let loose, the extra rams they get for critical strike plus the positive damage flips ensure that when they hit, they’ll hit hard. Their weakness in melee means I doubt I’d take more than two (and in this game, I didn’t pair them up either) but they definitely have their role, especially in a Lucius crew with his ability to hand out Focus so easily! Seriously cool models, these ones. :)

So overall I really enjoyed playing Lucius, which probably isn’t a surprise given how similar his support role is to that of another favourite of mine – Zoraida! For this game I used him in his “Guild Guard” incarnation, but I’d certainly be keen to try him out with Mimics and also in a Brilliance-heavy crew, where he can really abuse the minion status of those Beckoners and Illuminated.