So after quitting the Ressers and asking for advice on the Wyrd forums (here), I finally decided to switch over to Ten Thunders for the foreseeable future! Now that I've thought about it I'm feeling pretty confident about this decision. Aesthetically some of my favorite crews are from the Ten Thunders, and I really like the variety in playstyles I'm starting to see within the Faction. Not quite as insanely varied as Outcasts, but I'm pretty sure it's enough to keep me interested for a while!

Anyway, over the next few months I'm aiming to post up my experiences with the Faction as I get in some games. But for now, I thought I'd start with some initial impressions of the Faction's Masters; 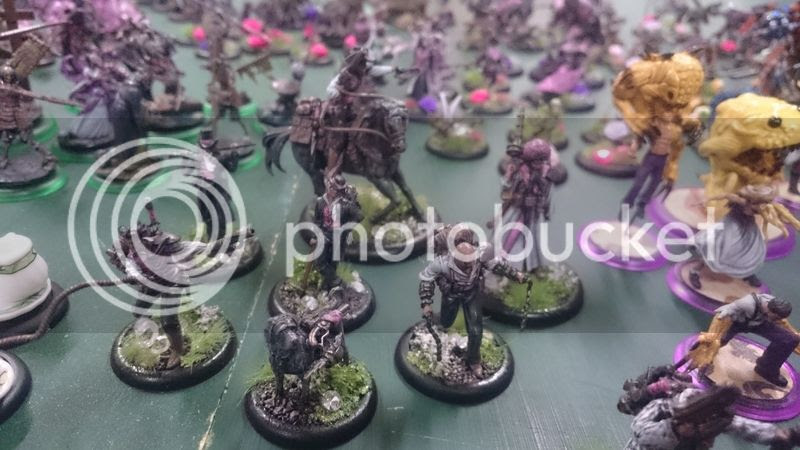 Lucas McCabe
While I've only used him as a Guild Master, My initial experience with Lucas last year was positive. I like how he works as a support/generalist type Master, and throwing upgrades around gives me the chance to do fun things like getting a Low River Monk to beat someone in the face with a Glowing Sabre!

My core McCabe crew is pretty much done. I even have most of the Guardsmen he could hire in fully painted and based, with the exception of a Warden and Pathfinder (and the Wave 3 models, but nobody's counting those!). The negative is that all those Guardsmen take up alot of space in my Malifaux Bag. So as I paint more of the generic Ten Thunder models I'll probably need to start rationalising just which Guardsmen I actually want to regularly use with McCabe. 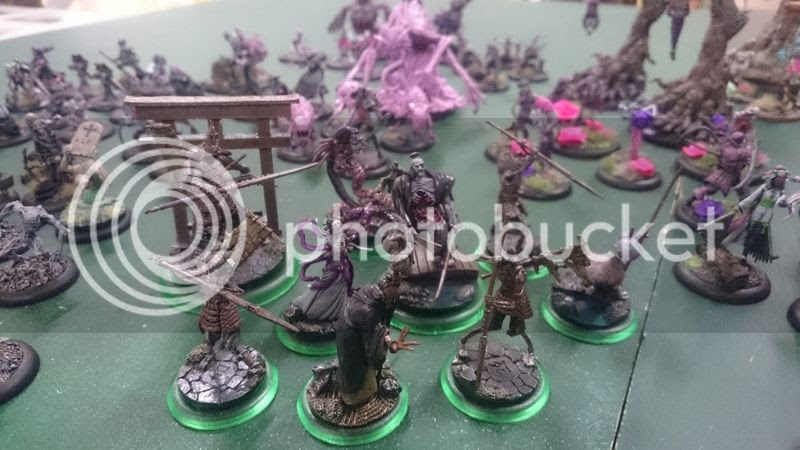 Yan Lo
Ugh, Yan? Well I guess I can't escape the Ressers completely. ;) To be honest I'm actually interested to give Yan Lo another try as a Ten Thunders Master. If nothing else I'd at least like to figure out how to make him feel like a Master, rather than a half-baked amalgamation of 2-3 support minions!

I still don't like the models I have for his crew though, so at this point I'll almost definitely replace, repaint or at least rebase some or all of them. I have a few ideas in mind as to how to do that, so hopefully I'll have something to show later on... 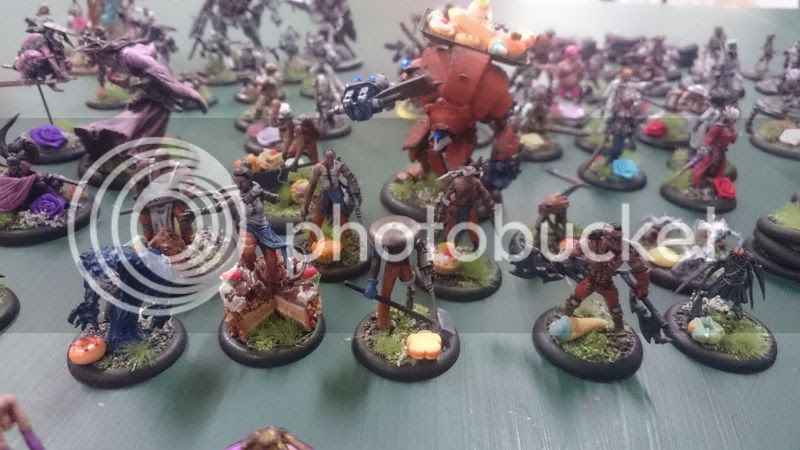 Mei Feng
Since my game with her last year I've paid very little attention to Mei Feng. Until, that is, last week when I started pulling out her cards and seeing what I could do with her. As a Ten Thunders Master she loses access to alot of good Arcanist constructs, but from reading her rules it shouldn't be a problem to have only a few such models in her crew. Still, I definitely feel like she'll need some experimenting to get a feel for what balance of models is going to work best with her!

Model-wise, my Mei Feng cake crew is easily one of my top two in the Faction (it's her or McCabe). I've got all the Foundry models she can take, but I'm still not exactly sure what to prioritise painting for her from the 10-T side. Well, except for Komainu of course! So that'll at least require a little more thought and plenty of experimenting. 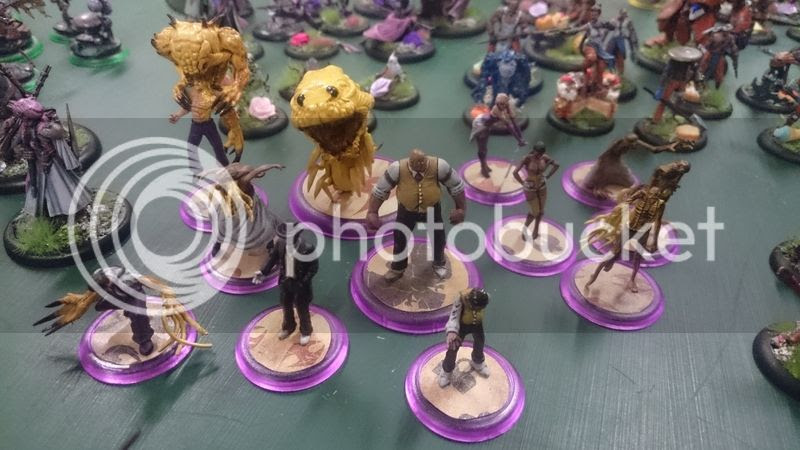 Jakob Lynch
Jakob Lynch intrigues me. On one hand (and like most Neverborn) he's got some pretty specific synergy with a certain subset of models (ie. Darkened/Brillianced models). But the potential is definitely there for him to mostly ignore that specific synergy and play with a more diverse crew. My game with him last year proved to me that the latter approach was at least viable.

As of writing this I've already played one game with Jakob Lynch, just this week. I'm hoping to talk about it in more detail in a seperate post, although I'm already starting to see how I could better utilise him and his crew. For instance I probably need to take better advantage of models who can discard cards (like Aces...) for effects. 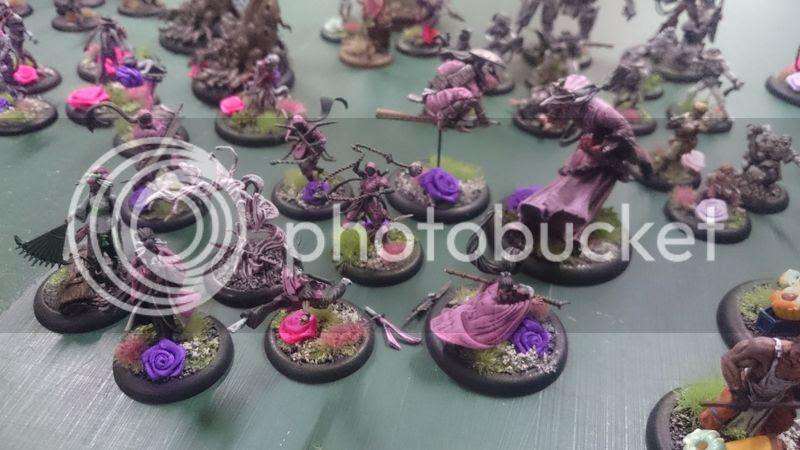 Flying Ototo still ranks as one of my favorite conversions. ;)

Misaki
I played Misaki as an Outcast for a while last year, and quite liked her too. Switching her over to 10-Thunders will be VERY interesting though. Two of my three standard upgrades for Misaki were Outcast only (Oathkeeper and Scout the Field), so I feel like I'll have to shift my playstyle with her a fair bit now that I'll be using her as 10-T. The plus is that her new Faction has quite a few great options to force my opponent to discard cards, with both Tannen and the Misdirection upgrade coming to mind. So I suspect Misaki's Assassination trigger will be getting a bit of a workout.

Like most of the other Masters here, Misaki's core crew is ready to go. I even managed to repair the staff pieces that broke off Misaki and Yamaziko when I went to Gencon 2014, so they're all looking super-awesome again. :) No models, so here's a stock photo...

Brewmaster
I've heard horrible, horrible things about Brewy's ability to pin down swathes of enemy models with his free booze. So naturally I'm keen to try it out for myself, partly to see how broken it can be and by extension, its limitations and weaknesses for when I'm facing it. To be honest Brewmaster is the 10-T Master I'm least interested in trying at the moment. There's alot of people out there saying it's not a fun playstyle, and that's not really something I want to inflict on my opponents. Still, he's probably still at least worth trying out for myself.

While I do have two Nightmare Whiskey Golems in their boxes (one regular, one translucent), I don't yet have a Brewmaster crew to play with. I'll pick one up this year of course, but I'm still secretly hoping they do a translucent Brewmaster crew to sell on Black Friday. If nothing else that'll make it much easier to get them up and ready for some games. ;) 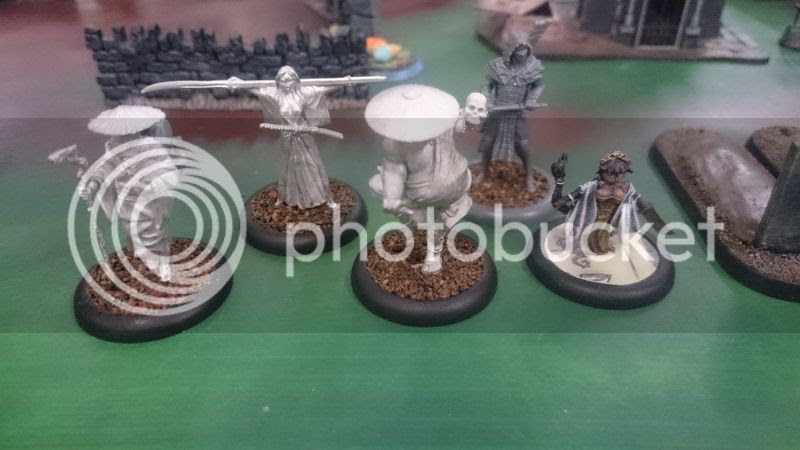 Shenlong
I've always really liked the Monk archeotype. In a world dominated by magic, swords and guns, there's something seriously bad-ass about a guy who wanders around beating people up with his bare hands. So it's probably not surprising that I've been looking forward to Shenlong ever since I saw him in the beta.

In terms of gameplay, all I really know about Shenlong is that he's decent with scheme markers and good at boosting his crew. He's got some chops in melee too, so I guess he's a little like McCabe in that he's a bit of an all-rounder (assuming I'm even right about McCabe!)?

While I don't currently have a Shenlong crew, I do have some proxies from the Bushido range for him. I did make a start on the crew a few months back, having assembled and partly painted a small Sensei Yu crew for a few campaign games (above). It shouldn't be hard to get the rest of the crew together, but the real challenge will be figuring out an interesting theme for them. Right now they're mostly black and white, which is pretty different to my other crews but not really that interesting. It needs...something, but I honestly don't know what that something should be...

The Problem with Ten Thunders...
I really like what I've done with most of my Ten Thunders crews thus far. Unfortunately and as you can see above, there are some wildly different styles between my Masters. This was something that's held me back from getting into the Faction until now. After all, how am I supposed to paint models to somehow fit into crews for Lynch or Mei in particular, without looking our of place in other crews?

If I think about it I can probably get most of the crews I have to match. If I stick with a scheme similar to McCabes for most of my new models (and assuming I replace Yan Lo) it's really just Mei and Lynch who will look out of place. The alternative, however, is to just embrace the diversity and paint the crews how I want. Sure, some models will continue to look odd when I take them outside their native crews. But it gives me the chance to continue painting the models how I want. And at least for the minions that come in 3's (Samurai, Archers etc), I could paint each in a different scheme to match multiple crews. I feel like that latter part is going to require some planning (eg. is it worth painting a Samurai for Mei Feng's crew?), so we'll see how that goes.

But as I alluded above, my main concern at the moment is figuring out a theme for Shenlong's crew. Hopefully I'll sort that one out at some point!