I have a lot of Malifaux models. Close to 300 in fact! And one of the problems with having so much Malifaux goodness is that I just don’t have the time to give all of them some decent table time. Of the 23 crews I have, I’ve only played most of them once or twice, and some have yet to see any table time at all! In the past, this dilemma has led me in one of two directions;

1.       Focus on just a few Masters and get as good as I can at those.
In the past I’ve focused on Zoraida, followed by Marcus and then eventually Lucius. Then once M2E hit stores I decided to stick just with Neverborn, which is what spawned my first set of blog posts over the past few months.

Whether through design or necessity, I suspect this tends to be what most people do. Focussing on a single Master is certainly the best way to get good at that crew, but on the other hand I don’t get the chance to use most of the rest of my collection.

2.       Occasionally use Masters I’ve not played with before.
In most of the tournaments I’ve recently attended I’ve chosen to take Masters I’ve never used before. It started a year and a half back when I brought my Nightmare Dreamer crew to the Australian GT, then it was Mei Feng at Cancon 2013, Jakob Lynch at Skulls Malifaux a few months back and then most recently, So’mer Teeth Jones at another local tournament. I’ve actually enjoyed this approach immensely – it presents me with a bit of a personal challenge at the event, motivates me to paint up crews I would have otherwise left alone and effectively acts as a crash course on how to use that Master.

As it turns out I’ve had a lot of success with this approach too – most of those events I actually placed first in! So while I don’t get the chance to perfect that Master’s playstyle, it does give me a very good feel for how they work, certainly enough to compete well with.

For 2014, then, I’ve decided to take the second approach. Not only that, but to make it more of a challenge I thought I’d take the idea somewhat further…

Introducing: The Rainbow Challenge
Yeah, it’s a bit of a lame title but hey, it serves it’s purpose. ;) So for 2014, I have two primary aims;

1. Have a painted crew for every Master in Malifaux.

2. Play at least one game with every Master.

The idea behind this is two-fold. First of all it gives me an excuse to buy and paint even more Malifaux, as well as paint what I already have. ;) Secondly, it gives me the chance to get a good feel for every Master in the game. Not only would this help me understand how to deal with them as an opponent, but I’m hoping it will also help me understand their appeal. For various reasons I’m not a massive fan of some Masters, so this challenge may help me see them in a better light.

In total there are 39 Masters available in the game, including 10 dual faction Masters. If I can I’d like to get a game for each of latter in both of their factions, but that will depend on whether I have the time. Realistically though, the biggest challenge will be in acquiring and painting the crews I don’t own, so it might pay to see just how much work I have ahead of me… 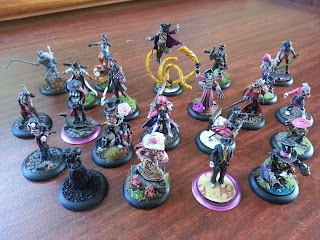 The State of the Collection.

I think it’s time for a Table!

So the Complete Masters are those whose crews are fully painted and ready to play. In some cases I might want to add one or two models before I put them on the table (like finishing off the Young Lacroix for Ophelia), but otherwise they’re playable. I should probably note that Jack Daw is only on this list thanks to the efforts of Paul (abraxis04), who’s been generous enough to paint and send me a Jack Daw crew for the Christmas exchange!

The Incomplete Masters are those who I own but still need to be assembled/painted, or in the case of Von Schill, I still need to acquire a few more models to make the crew complete. These should be relatively easy to finish off.

The Yet to Buy Masters are self-explanatory – I simply still need to purchase them.

Finally, there are the Unavailable Masters – those Masters who don’t yet have an available crew box for sale. These are going to be the toughest – even if some of them are available at Gencon 2014 I’ll still need to find suitable proxies for some, if not all of these crews. I have some ideas on what I could use to proxy some of these (Brewmaster’s crew is practically sitting unassembled in a bag on my desk), but others are going to be tricky. Ultimately I’m waiting to see the art for these models before figuring out what I could possibly use as a proxy.

Anyway, that’s where I’m at. Wish me luck, and enjoy the New Year!